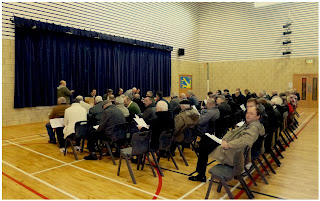 Not long back from the Airdrie and District Angling club AGM. It appeared to be better attended than it has in the last few years. as you can imagine it was just the usual club business of election and re-election of all the various posts in the club. Along with all the usual debate about stocking policy etc there were two stand out observations foe me at this meeting which were that it was announced that the last year was the most successful year in the angling club's history. The other being that the club are to consult Dr Willie Yeomans of Glasgow University to arrange if possible to have a complete survey of Hillend Loch to assess fish population and the environmental health for the fish in the loch. I look forward to the findings of this.
Prices remain pretty much the same but an increase of £5 on the annual membership? which I find a bit frustrating as after all this was the most successful year in the club's history.
Anyway the club is in good hands as we move forward. Only 47 days to go until the season begins.