The one that got away! 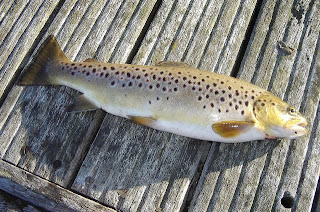 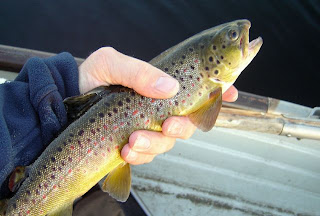 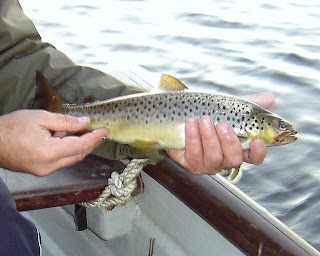 I had another enjoyable evening fishing from the boat tonight at Hillend.We set off from the Lodge about half past five this evening and fished until about nine o'clock. It turned really cold for the last half hour of the session
We went on over to the west end of the Loch near the dam. The wind direction was very changeable tonight and never really got any real good long drifts as we had to continually reposition the boat due to the wind being so varied. On the first drift we were moving from the North shore southwards to the Big Moss when Scott hooked an incredibly big fish.Such was the power of the fish we had to get the drogue in and use the outboard engine to catch up with the fish as it continually was taking line from the reel. The fish lead us a merry dance as we tried to keep up with it. Scott had been fighting this fish for twenty minutes and still it hadn't broke the surface. Then all of a sudden a fish splashed at the top dropper it was then that the fish which was attached to the point fly broke the line. Scott was shattered, he was gutted that we had lost this big fish. We reckon that he had hooked one of Hillend's famously large Pike but some huge rainbows were stocked last week up to 15pound. We will never know what was on the end of Scott's line the one thing we do know is that it was a very big fish indeed. By way of consolation the brownie that took his top fly was a beauty, as you can see from the pic. As the night progressed we caught numerous perch and eventually we both landed another brown trout each. It's quite interesting to see the variation in colouring and spots on the fish as my fish had quite a few red spots while Scott's were black.
It was two very happy but cold anglers that made it back to the Lodge for a hot drink and to tell anyone that would listen about the big one that got away.