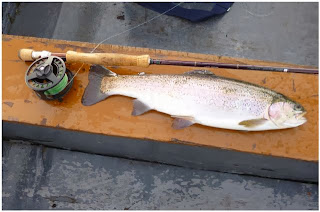 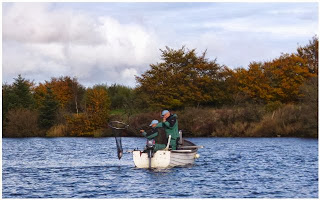 Today I had my first ever Black Loch Blank! Its got a certain ring to it eh? and a phrase I hope I don't have to use again.
Tam and I arrived about 8.30 this morning full of promise and advice on tactics etc from various regulars and were surprised to see so many cars and anglers in the car park. A fly fishing club called the Rainbow Warriors were having an outing there today. Apparently they are well known on the competition scene. Something I'm not very keen on.
They were all decked out with their best fishing suits, boat chairs and a ton of gear.
What I roll my eyes at is that most of them treat their fishing as a secret mission. They are never willing to pass on advice and even hide their fly patterns from view of  other anglers. They really are a competitive lot but amongst all the one-upmanship they do appear to enjoy themselves and are fairly successful too. So who am I to criticise.
Anyway I digress I'm just a crap angler who who enjoys going fishing. Today I tried various tactics and patterns all to no avail. Tam caught one nice fish a 25 punner. Anyone who fishes the Black Loch will know what I mean lol. Tam also had a few rises to his flies too. Tam's successful pattern was a wee cormorant.
I only found out last week that the Black Loch was open all year weather permitting. I just assumed that it closed on the 6th of October like most venues. If the weather doesn't turn too cold I will have another visit in November.