Last trout of the season 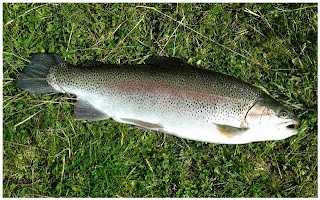 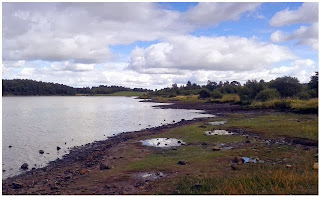 As yesterday was the last day of the trout season at my local loch I decided that I might as well have one last visit to Hillend yesterday afternoon.
So after watching some football I got prepared and went up to the loch to see if I could get a favourable result.
When I arrived at the loch I got chatting to a couple of anglers who were up north last week too and they were telling me all about their success.
I heard that a few fish were getting caught on the north shore but I opted to walk along the south shore to the Eastercroft bay and work my way back to the club house from there.
Before I started I boiled up an nice mug of curry soup then I started fishing from the jetty at the easterfcroft and worked my way round the cliffs past the next jetty just before the wee moss. It was then that I hooked and captured my last trout of the season. It was a rainbow, round about the 4lb mark and it was fooled by one of my cormorant patterns which I had on the point, I also had the obligatory Kate on my dropper.
I then worked my way along the south shore fishing from various points but without any further success.
I was probably the last fisherman on the the south shore as I reeled in my line, snipped off my flies and packed away my rod and reel.
As I looked along the shore, the loch did have that end of season feel to it and the old place looked in need of a rest as the water is very low at the moment and the banks are all muddy and messy looking.
It was not a bad way to end what was a mediocre season for me at Hillend.