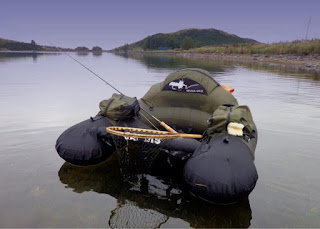 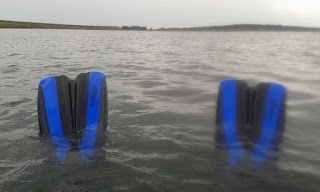 I had another outing on the tube last weekend, this time at Hillend's neighbouring loch the Lily!
I wasn't as successful as my first time afloat as I didn't catch any fish , however it was great fun to be out in the tube. I was really surprised that I could manoeuvre all over the 60 acre loch without any trouble. Perhaps I spent too much time moving around and maybe should have concentrated my efforts in some areas a little longer. I suppose I was just getting to know the tube and how to handle it etc, it was  great  to try in at the dam as well as square bay, Scunners point, the big weedy bay and all down the south shore. I could have done with a trout though.
However I wasn't downbeat, far from it in fact I'm rather excited about the possibilities with the tube therefore I'm going to have another visit with the tube to the Lily this weekend as the Lily stays open until the end of October.
The Lily may be open for a further few weeks but the official 2015  brown trout fishing season has now ended but I'm already excited about getting out on the tube next season to some hill lochs that I would like to visit but in the mean time the Lily will do for the next few weeks.