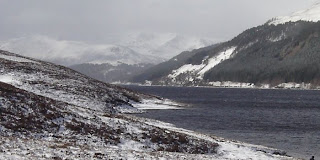 After visiting wintery Hillend today it reminded me of a fishing trip to Loch Ericht early last year. Here is an account of the trip I wrote once I had thawed out.

My first serious fishing trip of the season got underway at 4am last Sunday morning. Our destination was to be the north end of Loch Ericht near Dalwhinnie. We wanted to be there for first light so hence the very early rise and journey up the A9.
The trip up was uneventful until we got to the roadworks at Balinluig as by the time we reached there the countryside had taken on a rather winery feel as the hills and fields had a light dusting of snow. Onward we drove but as we got further north the weather was really starting to get serious. The snow was falling and it was lying really deep, the road ahead just got treacherous and at times very dangerous. By the time we reached the Drummochter pass we were right in the middle of a blizzard. It got to the stage where we couldn’t see four feet in front of us and it was becoming difficult to distinguish where the actual road was. Those snow poles on the verge of the A9 do really come in handy when the weather is as bad as it was last week.
Eventually we crawled into Dalwhinnie to be met by the snowploughs assembling to take on the elements that lay in waiting for them on the A9.
We parked up by the dam at the Ericht and then contemplated what to do next. Were we actually going to do any fishing? Well we had made the effort to get there and we weren’t going to make it a wasted journey, but then again the reality of the conditions outside the car would have to be taken into consideration. After an hour of contemplation it was decided that we would brave the elements and get ourselves as quickly as we could down to the boathouse on the northeast shore.
My mate Tam assured us that the weather was to get better as the day went on as we marched through the wind and snow to the boathouse.
My intention for the day was to fly fish My the loch so I only packed my fly fishing gear but as you can imagine the conditions were not apt for fly fishing a huge Highland loch. It was just as well my companions were bait fishing and had a couple of spare rods. I tackled up in the boathouse and before I did anything else I got the frying pan on for our breakfast and left the others to go outside and start fishing.
I had just finished cooking the fist batch of sausage and black pudding when Scott bust in the door to tell me of the first fish of the day. A nice 1lb brown trout.
It was just as well we had set up camp in the boathouse as I was freezing and not feeling well at all. I felt as if I had the flu coming on. The four of us fished all day and the result was 20 fish between us Scott had 8, Tam had 6, I had a brace and Nick caught 4. All the fish were caught on either worm or maggot.
I spent quite a considerable time in the hut huddled in the corner as I really did catch the flu as well as a couple of fish. When I did venture outside I managed to get some nice pics of the wonderful scenery that was all around us.
As promised by Tam the weather did clear for most of the day but as we made our way back to the car at the end of the day it came back with a vengeance just to insure that we got thoroughly cold and wet for the two hour journey home.
It has taken me a week to write this wee report as I am only now beginning to get over the effects of the flu. Never mind the best of the season is still to come and I maybe will get back up the Ericht in the summer and do a bit of fly-fishing, as there were one or two likely wee bays I fancy casting my flies into.