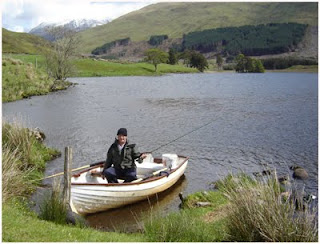 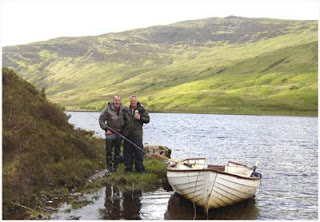 With all this snow and loafing about the house, my thoughts have been turning to fishing trips past. This account of an outing in Lochaber from a couple of years ago helps build up my enthusiasm for the forthcoming 2010 season.

Last Saturday morning me and my two friends Alex and Jim traveled north through four seasons in one morning up to the witch’s lair. This had nothing to do with Black Magic you understand, as the destination we were heading for, Loch Lundarva is reputed to be the lair of McBeth’s witches. There was no sign of sorcery or broomsticks as we made our way along snaking single track road from Fort William to Lundarva farm that has more ups and downs than Airdrie FC’s recent season. In fact we got a friendly welcome from the farmer and his wife who we met in the farmyard and purchased our permits from.
They directed us to the parking area and the boat moorings beyond the farm and wished us luck.
We arrived at the Loch which is set in a cauldron of hills with a fine view of Ben Nevis which appeared to have a light dusting of snow. The weather wasn’t too bad but as we were setting up black clouds were rolling in and it was just a matter of time before we would get soaked and soaked we did but after quarter of an hour or so the rain passed and the weather was kind for the rest of the day.
We started of fishing from the bank and I was soon into a couple of fish that to be honest were not all that big.
We decided that we would take turns in the boat as three in a boat can often lead to tangles and a lot of swearing so Alex and I were first to venture out on the HMS Lundavra.. We rowed up to the weedy west end of the loch and drifted down past the wee island all the way down to the east end. Most of our fish were caught around the tree clad island and close into the shore. We never had much success in the open water so we tried to stay around the island where the fish were plentiful
I wished I brought along my electric outboard motor, as it was hard work rowing up and down the loch. I was pleased to catch some of my trout on the Clan Chief as this was the first time I had ever caught anything on that fly other successful flies were the Connamarra Black, brown palmers, Kates and butchers.
We all caught around ten fish each the biggest being around the half-pound mark.
Lundavra is a pleasant loch and is well worth a visit if you are ever in the area. I have visited Fort William many many times but this was the first time I had traveled up the single-track road to Lundarva. The view of Ben Nevis as one drives up the road is quite spectacular. I have climbed the Ben four times, once via the arête and three times by the path. After seeing the Ben yesterday I think it’s time I re-acquainted my self with it.
Just as we were leaving Lundavra the opportunity of procuring a couple of capes for the purpose of fly tying arose but I don’t think the farmer would have been best pleased if one of his hens had disappeared.