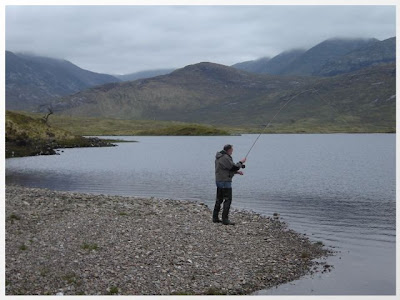 Although we are only a week into the close season I have been thinking of possible lochs to visit and also to make return visits to. One such loch is Loch Dochard near Bridge of Orchy which I last visited in 2007. It's in a wonderful location and is a pleasure to fish. Here are a few words I wrote about my trip there three years ago. I hope you get inspired enough to fish it one day. You won't be disappointed if you do.......
At long last I made my long awaited trip to Loch Dochard. My friend Jim and I set off from deepest Lanarkshire early on Friday morning at around 7am and arrived at Victoria Bridge a couple of hours later. On route we stopped at Mr. Brodie’s wee shop in Tyndrum where we had a coffee and a bite to eat before setting off again on the short trip to Viccy Bridge. We parked in the car park close by which is mostly used by the hill walkers who are probably bagging Stob Gahhahr and Stob a choire odhair.
We began our walk and followed the land rover track by the Forrest Lodge and then by the course of the Alhainne Shira which looked rather tempting for a cast or two but we resisted as there was a two hour walk and quite a few camera stops ahead before we could reach our desired fishing destination.
After a couple of kilometers we reached the the point with a choice of routes we opted for the track to the left that is the right of way to Glen Kinglass. This path follows the bank of the river which is boggy in places but not too bad and eventually leads you to the bridge over the Allt Ghabhar and then after a short distance through the forest the track leads to the suspension bridge over the Alhainne Shira which is a bit wobbly but perfectly safe then after a further kilometer and a wee bit of a climb we reached Loch Dochard. The view as one reaches the loch is breath taking and I can honestly say that I am not exaggerating when I say that its one of the most picturesque lochs I have ever visited.
Just to be nosey we had a wee peek in the shepherd’s hut that’s marked on the OS at the south shore of the loch. I assume its still in use as there was some sort-discarded instrument or other for injecting the sheep well that’s what my mate thought it was. The mind boggles at the thought of sheep on smack.
We approached the banks of the loch form here and set up base camp at the wee shingle arm on the south bank. I was just setting up my rod and line when Jim was into his first fish of the day, he caught it on his first cast but the wee bugger took him straight into a snag and inevitably he lost it.
He wasn’t too disheartened a there was plenty of willing takers of his flees for the rest of the day. At the end of our day we both caught well into double figures and not surprisingly there were no record breakers among them. The fish we caught were beautifully marked and I’m glad to report that every single one of them were returned safely from whence they came.
We fished all along the south shore and kept moving on after we had caught fish from the one area. The fish were caught on bibios, Kates, and most of mine were caught on a wee brown bushy palmered fly of my own tying.
I would have loved to explore the rest of the loch but was too lazy to do so. The next time I go there I will camp overnight as it’s a two-hour walk in and a two-hour walk out. The walk out is knackering especially after fishing all day. On the way back to Viccy Bridge I had an interesting find, a set of antlers which I am going to get mounted on my garden shed. We also saw plenty of deer in the area and managed to get a few photos of them but as they were a bit far a way the pics are not the best. As we retraced our steps we met an Englishman who was camping by the river, we got talking and told us that he was staying there that night as he was meeting up with a group the next day coming up from Glenkinglass they were doing a walk across Scotland from the west coast to the east.
A very interesting and satisfying day at Loch Dochard and it’s a place I will definitely be going back to but with an overnight stay in my newly purchased Argos tent. One place I will not be re visiting is the chip shop in Tyndrum. 5 quid for a white pudding supper and a can of coke, they are having a laugh.