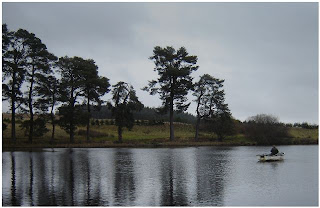 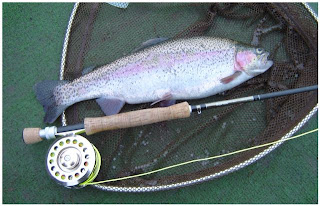 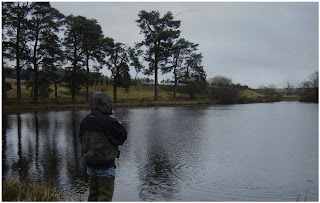 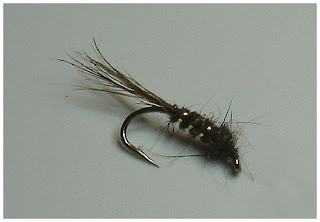 Yesterday I visited a fishery for the first time in a while.I don't normally visit fisheries these days as they do have a bad press and usually attract the type of angler that makes me despair.
However this fishery isn't your usual hole in the grun type. Orchil is a very picturesque fishery just a few miles from Gleneagles and is well managed and cultivated.
Scott and I arrived early in the morning. It was bitterly cold and numbing on the hands. Regardless we set up and made our way round to the area we fancied fishing.
I was soon into the first fish of the day a 3lb rainbow fooled by a wee harelug nymph which had the unusual material of wild boar fibres for a tail. I was using my sink tip line at the time too. Soon after I got another solid take but sadly lost the fish during the ensuing fight.While all this was going Scott got his first fish then after a wee while he got another.
Then the moment I had been dreading happened. He arrived at the loch in full camouflage gear from head to toe with a khaki balaclava on. It was actually surprising I actually saw him as he fairly blended in with the trees etc. On his shoulder was the biggest tackle bag you have ever seen in your life. He asked how we were getting on and what flies had been successful. He then said at this time of year he likes to fish further on up the bank and across the burn. I didn't bother asking him why he opted to fish next to me. I then got the usual stories of all the fisheries he has been to recently and how he caught huge trout on his top of the range reels and rods and so it went on with tales of his secret killer patterns. I decided to move on elsewhere in the fishery as this chap was starting to get on my nerves as he described the takes he was getting and then when he actually caught a fish was holding it up in the air to show me. Did he think I didn't know what a fish looked like. Perhaps he was just over enthusiastic and maybe I'm just an old fuddy duddy. Nah Ive met these types before.
My change of location and a switch to a floating line eventually paid dividends as I managed to net my second trout of the day. At mid day Scott and I decided to pack up as it was still cold and the rain was starting to get heavier.
Delighted with our catch we went to the weigh in shed. I had 5lb of fish while Scott had 4 1/2 lb.
After a quick wash and a change of clothes we set off for Auchterarder where we finished off a great  day out fishing by treating ourselves to a couple of delicious but rather messy steak bridies from the bakers shop washed down with a bottle of juice.