September 08, 2018
Last month I was fortunate enough to be one of four fly men namely, The Dabbler, Bibio, Soldier Palmer and Bob Fly who had a weeks fishing on Lewis and Bernera.
I was keen to go this year as I missed out last year due to a family bereavement therefore I was really looking forward to this trip as I haven't done much fishing over the past year or so.

Bibio and I arrived a day later than planned on the Sunday evening while Solidier Palmer and Bob Fly arrived the day before. We soon settled in and over a few beers we planned the week ahead

Monday. Bob Fly and I visited the Callanish Stones to pick up good vibes before going out on the tubes on a Lewis Loch further east. We both caught a decent number of troot, we lunched on an island and had a wonderful day bobbing about the loch Catching, missing, dropping and rising troot to various patterns!
Then it was back to the digs to meet up with the two other fly men for dinner, drinks and chatter about our respective days among the troot. On this occasion Bobfly made a lovely stew which went down well with every one!

Tuesday. I was on a loch near the digs with Soldier Palmer. I was on the tube while SP  fished from the shore!
Again another successful day with a good few fish with a couple of them being of a decent size!
Once we had our fill we both returned to the digs. While waiting on the other two fly chaps I went out for a walk around and above the nearby lochs and hills to take in some of the lovely views.
When all four of us got back to the digs I made a meal on a Stravaig for the lads for the first time and was  pleasantly surprised that my pasta bolognaise went down well. Afterwards we indulged in the usual refreshments and snacks followed by a wee bit of flytying!

Wednesday. I was on a boat with Bibio. I found this to be a really tough day as I didn't cope very well on the boat in the high winds. All my failings and inadequate casting ability came to the fore resulting in me only getting one nice small brown trout and a fingerling troot too!
However Bobio coped admirably In the poor conditions and made his casting style look effortless which brought him success with the fish. He was a joy to watch and at a level of fishing and casting that I should aspire to.
In the end I was a little embarrassed at how poor I coped with casting  in that wind as well as all  tangles.
I was probably a hinderence to Bibio and the boatman.
However it was a great experience in some truly outstanding remote scenery.
I may not have caught much fish but I did manage to capture some great photos that day!
Back at the digs Soldier Palmer had intended firing up a bbq but weather conditions dictated otherwise so SP rustled up some chicken, sausages and chips in the oven instead, followed refreshments, crisps and nuts. No flies were tied that night as I was shattered and had an early ish night!

Thursday.  Bob Fly and I were on the hoof to a couple of lochs up on the moors above the Pentland Rd. We both caught a good number of trout but nothing of any great note size wise!
Back at the digs Bibio made a nice big pot of haggis, neeps and tatties. Followed by the customary drinks and talk of our respective troot encounters!

Friday. Our last day fishing. I was out with Bob Fly while Soldier Palmer went elsewhere with Bibio.
Bob Fly and I were on the tubes again and on this occasion we wandered between four local lochs which were all connected by small burns. We started at the furthest away loch and made our way between them ending on the loch where our cottage was situated. This was an fantastic and interesting day! I caught a few dark trout from the first loch, nothing on the second loch, however Bobfly caught a cracker about the 1lb 3/4 mark on the 2nd loch which was rather windy, infact I was a bit uneasy on that loch due to the  wind on the exposed arm of this loch!
We then moved onto the 3rd loch which turned out to be rather weedy, however it proved to have lovely brightly marked trout in abundance which were a real pleasure to fool and release!
By the time we reached the 4th loch the wind went into overdrive so we didn't spend too much time out there. As much as we tried we never got an offer on the last loch and ended our day on the tube right in front of the digs!
And so my much anticipated fishing Stravaig to the Outer Hebrides was over!
Back at the digs over a few drinks I took stock and thought to myself what fantastic wild flyfishing experience that was
I had finally got my fishing mojo back! 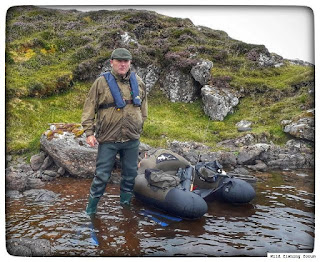 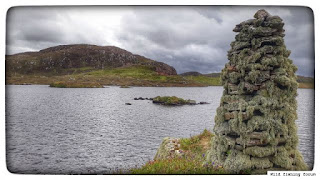 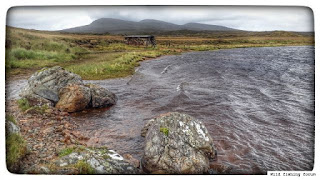 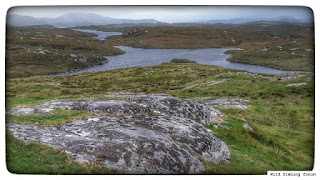 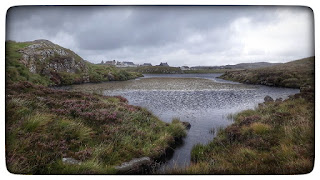 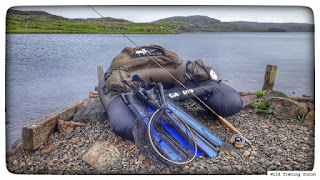 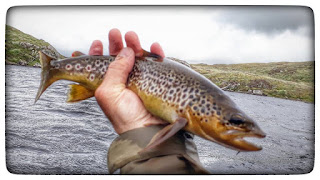 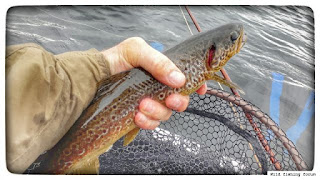 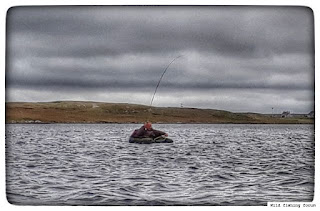 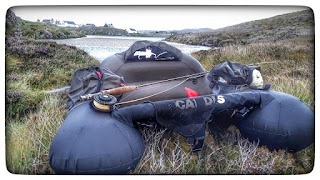 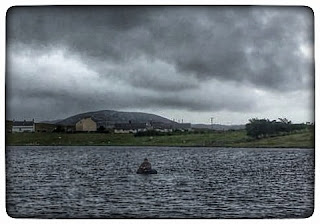 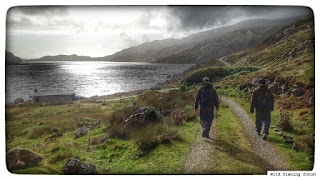