April 22, 2020
The original Loch Ordie fly pattern was designed as a dapping fly. However over the years there have been many variations. Mostly used as a top dropper pattern preferably in a good wave!
The pattern seems to have been very popular in Orkney and one of the first known variations was a pattern tied by a Mr W S Sinclair of Orkney at the request by someone of his acquaintance. It was tied with black hen hackle at the back a gingerish hen hackle in the middle with a white hackle at the head
Fished wet it proved to be a very successful variation. My friends and I have fished this variation on various  Scottish Highland Lochs and can vouch for its success. It's a big favourite of ours.
The number of variations of this fly pattern are so numerous you could fill a box with them!
Pictured here are a  couple of variations which I tied at the vice after they were recently brought to my attention. I reckon they are well worthy of my attention and look as if they might be even be a better option than the pattern used by my friends and I.
Tied on a size ten hook I tied these with feathers from hen capes and on the Leggy Half Ordie I incorporated black knotted pheasant tail legs.
When we get out the other side of this pandemic crisis I will look forward to putting these variations to the test! 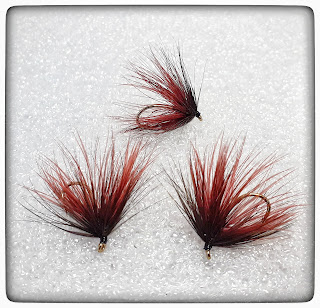 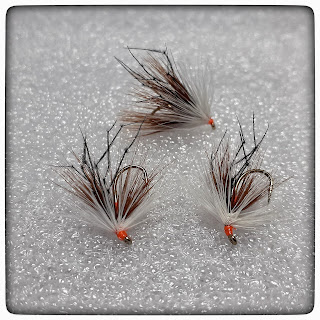 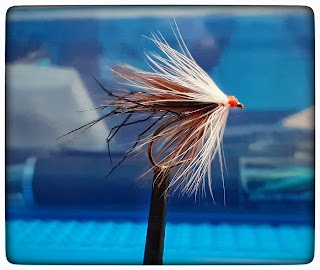