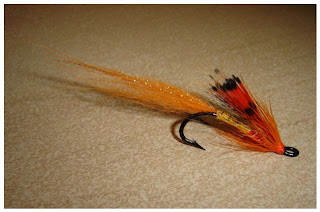 All being well, in two weeks time when I head to the far North of Scotland, I might get the opportunity to have my first ever chance of fishing for Salmon. I have never had any real incline to go after the King of Fish in the past but if I get the chance in two weeks I'm sure as damn not going to turn the chance down. I know absolutely nothing about Salmon fishing , some would say I know nothing about troot fishing either but that's another story so therefore I don't have a clue about how to go about it . It will be just a case of cast and hope for the best. I have been seeking advice on what flies etc to use. One of the patterns suggested to me was an Ally Shrimp. So I decided to have a go at tying this Salmon pattern all be it as ever a variation of the original the reason for this is that I don't have any black floss so just went ahead with a yellow floss. I'm fairly pleased with the result of my first ever attempt at a salmon pattern and to be honest I find them relatively easy to tie, probably because the hooks I used were so big . I reckon I need to get some smaller irons as they will be more suited to the River I will be fishing. If any of my readers would like to suggest some salmon patterns to use, go ahead I'm all ears.