A Man In Assynt 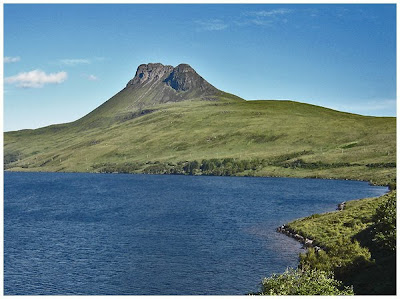 Here are a few lines from Norman McCaig's epic poem about my favourite corner of Scotland. This man can put into words, thoughts from my subconsciousness which I could never asseverate with anyone. The Castle like mountain in the pic is Stac Polly which I captured on route to Achiltibuie.

Glaciers, grinding West, gouged out
these valleys, rasping the brown sandstone,
and left, on the hard rock below — the
ruffled foreland —
this frieze of mountains, filed
on the blue air — Stac Polly,
Cul Beag, Cul Mor, Suilven,
Canisp — a frieze and
a litany.

Who owns this landscape?
has owning anything to do with love?
For it and I have a love-affair, so nearly human
we even have quarrels. —
When I intrude too confidently
it rebuffs me with a wind like a hand
or puts in my way
a quaking bog or a loch
where no loch should be. Or I turn stonily
away, refusing to notice
the rouged rocks, the mascara
under a dripping ledge, even
the tossed, the stony limbs waiting.

I can't pretend
it gets sick for me in my absence,
though I get
sick for it. Yet I love it
with special gratitude, since
it sends me no letters, is never
jealous and, expecting nothing
from me, gets nothing but
cigarette packets and footprints.

Who owns this landscape? —
The millionaire who bought it or
the poacher staggering downhill in the early morning
with a deer on his back?

Who possesses this landscape? —
The man who bought it or
I who am possessed by it?