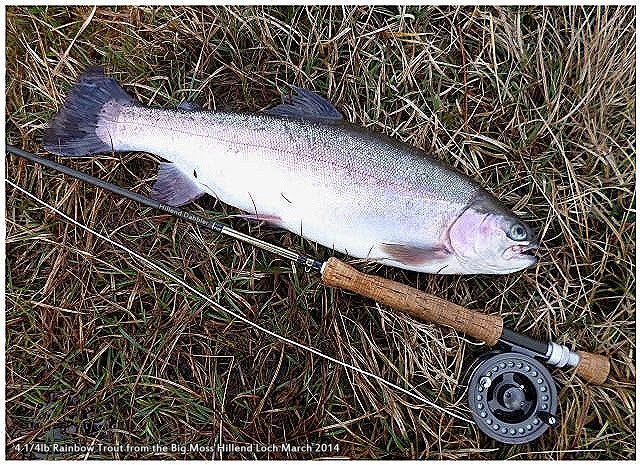 Three things were deterring me from going up to the loch this morning. Firstly the weather as it was blowing a hooly, secondly there was a competition on at the loch and thirdly the loch would be busy.
However as the morning developed into the afternoon and rather than just sit around the house listening to the football results come in. I decided to take a drive up to the loch.
On arriving at the clubhouse it was obvious the wind would be troublesome. So I went into the clubhouse for a bite to eat, a drink and a blether. Rab asked if I was going fishing I said yes but was unsure where to go because of the wind. He then said if I had any sense then I should go back down the road.
I laughed but made up my mind that I would go to the big moss as I would have the wind at my back. So off I went.
I met Iain a work colleague on the moss. I had a chat and then started fishing I hooked a trout but just as quick as I raised my rod the trout was off. After checking that my flies were still intact I fished on. After half an hour or so I eventually hooked into a nice fish. It leaped from the water several times and I thought I was going to lose it but I eventually got the trout under control and managed to get it into the net. The trout was fooled by one my black UV lures with the silver bead head which I had tied recently. The fish weighed in at an impressive 4 1/4lb my biggest of the season so far. I fished on for a short time after but after hooking the bottom I lost my loop, leader and both flies. My hands were in pain with the cold so I couldn't be bothered tying up a new leader so I decided to go home. It was a great way to spend a spare couple of hours listening to the football results coming in.