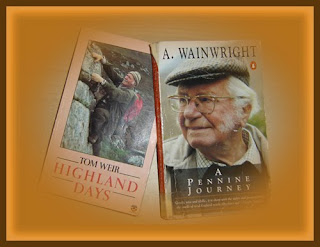 I would like to bring to your attention two books which I would consider to be my Desert Island Books. In many ways one can draw comparisons between the two but in other ways they are miles apart quite literally. One was written by a Lancastrian Englishman the other a Glaswegian Scotsman. Both men don’t really need an introduction as they are famous the world over. The authors in question are Tom Weir and Alfred Wainwright.
Climber broadcaster author and all round Great Outdoors man Tom Weir wrote his first book Highland Days, in a tent during wartime service with the Royal Artillery in Belgium in 1946.
The book begins with Tom explaining that he finds it hard to believe that the memories he began to put to paper in a guard tent in the summer of 1946 were thirteen years old. Tom’s first book recalls vividly his early years of exploration when he turned his back on the drab Glasgow tenements of the Great Depression and set out on a voyage of discovery of Scotland on the peaks, lochs, corries, glens and, not least the people of Scotland.
Fell walker, Artist and author and expert in all things concerning the Lake District. Wrote a personal journal in 1938 after completing a long distance circular walk in the Pennines from Settle in Ribblesdale to Hadrian’s Wall and back. The backdrop of the imminence of World War II and the news he receives during his travels adds poignancy to his “ A Pennine Journey”
Alfred Wainwright never intended his words and thoughts to be published. His journal was intended as a personal work for him to reflect on when ever he chose to.
In the 1980’s AW became somewhat of a celebrity after the publication of his Lakeland guides and his TV appearances and such was coaxed into publishing his personal account of his pre war journey in 1938 which went on to become known as “A Pennine Journey” some 48 years after he first penned his work.
Both these books strike a chord with me as they remind me of how I set out on my personal journey of self-awareness. The year was 1988 and I was still looking for direction. That direction I was looking for was “North” to the Highlands of Scotland. Where I found my true self in the mountains of Glen Coe and Glen Nevis.
My love of the mountains led me on a journey all over the country experiencing the mountains, glens and lochs and eventually led me to the Hills and Dales of the North of England and eventually onto my current passion which is fly-fishing.
I digress. I have read my two favourite books many many times and no doubt I will read them over and over again in the years to come. These two works of art never cease to inspire me and help cheer me up when ever I am feeling down.