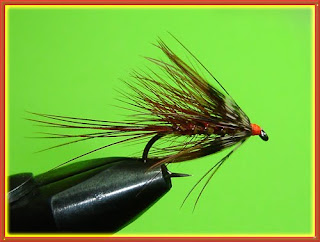 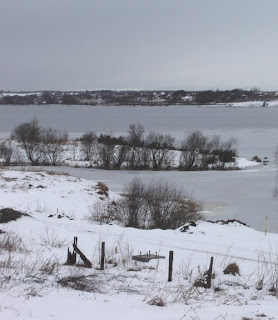 This was the scene at Hillend Loch today with two weeks to go to until the start of the 2010 trout fishing season. I hope we get some wind to break up the ice and warmer temperatures to melt it. The Western side of the Loch appeared to be covered in a layer of ice. I also noticed today that the new footbridge over the new railway line at the Hillend Lodge is now complete. Before going up to the Loch today I was at the tying bench messing around with Church window hackles. These feathers are beautifully marked. If I recall correctly I acquired these lovely hackles from a Pheasant I found at the side of a landrover track somewhere between Loch Rannoch and the South end of Loch Ericht a couple of years ago. Above is an example of what I was tying. I reckon this pattern will do very well at Hillend as a fry imitation and as a wet sedge pattern too.
The tying recipe is as follows......
Hook size 10
Thread Fire Orange Uni
Tail Claret pheasant
Body Golden stone possum with red holographic tinsel
Rib Copper wire
Body Hackle Fiery Brown
Collar Hackle church window Hackle