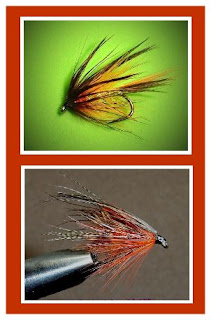 My wife is always telling me that I spend far too much time on my computer. She is probably correct but I find it far more informative, educational and entertaining than sitting watching a big flat screen television boring me to death as it flickers away in the corner of the sitting room.
More often than not my spare time in the evenings is spent at the keyboard and monitor and also the tying desk and vice. It's a great combination tying flies photographing them and then uploading them to the pc. I also have a list of favourite flytying sites and blogs which I visit regularly. One such site is Davie McPhail's you tube channel. Its a wonderful resource of flytying videos and instruction. For a while now I have been heavily influinced by Davie's tying and I firmly believe that my flytying has improved immensely by watching Davie McPhail's videos. Today as I clicked onto his site as I do most days to see if he has any new patterns uploaded I was pleased to see that new pattern was uploaded named the Spectrum Dabbler. I really liked the combination of colours and materials that were incorporated in the tying and decided that I would sit at the vice and try to come up with something similar. I started off trying to do something in the same vain but as I progressed and added the materials the fly began to go off on another tangent altogether and I ended up producing an entirely different pattern from which I originally set out to tye. That's the beauty of tying your own flies, you maybe influenced by something then go onto produce a a pattern of your own making. It's the same with artists, musicians and songwriters and the like, Any piece of work they produce has bound to have a little of what they were influenced by , it's only natural. Anyway here is a couple of flies I tied today after watching the Ayrshire flytyers website.