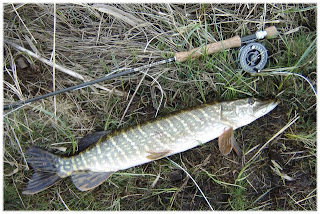 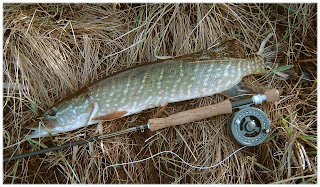 I went up to the loch on Saturday afternoon as I reckoned the brisk westerly wind would be ideal for fishing from the big moss. I looked down from the club house with the binoculars and noticed that the moss was heaving with folk, It looked like a whole angling club was fishing down there. So I decided to take a walk down the south shore and see if there was any space to fish along the way. I had a few casts at the Big Stane, the wee moss and the cliffs but never touched a thing.
As I walked back to the clubhouse I decided that after a coffee and a bite to eat I would drive round to the north shore and try my luck there.
I had heard that there was plenty trout getting caught down by the Shields burn but with me in my wellies due to my waders being busted and in need of a replacement my fishing was somewhat restricted so I opted to fish once again from the piece of moss that juts out to Spiers island.
With the wind at my back I proceed to cast up and down the squelchy moss.
As I fished away I knew I was more likely to catch pike than trout as the habitat here is perfect for the Hillend predators.
As expected I hooked and landed pesky pike and just as Iain was netting the first fish for me another pike made an attack at the hooked fish. What a sight and a commotion that was as the big greedy pike missed out on his meal. Soon after I caught another pike. I have to admit that although I was fishing for trout I rather enjoyed the fight with these two predators as they fought fearlessly and violently as they took great long runs ripping line of my reel at great speed. I was actually surprised that they never snapped my line as I was using my usual 4lb mono leader material. Maybe I should actively set out to catch these beasts? Nah! I prefer to catch trout. I really need to get those waders repaired or replaced.