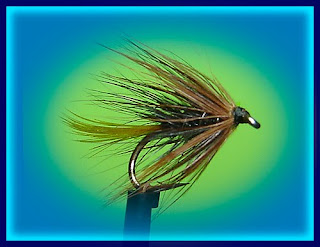 There can't be many flies that are named after a woman,this very famous Scottish fly as you probably guessed is one, of only two that I can think of, the other being a Hairy Mary, I'm sure we all know one of them lol!
So who was Kate McLaren? Kate McLaren was the wife of John McLaren who ran the Kinlochewe hotel in the Scottish Highlands. The Mclarens were good friends of the Glasgow tackle dealer, William Robertson. Mr Robertson devised the pattern in the 1930's for his friend John and as a nice touch named it after his friend's wife.
Kate McLaren was also the mother of Charles McLaren who was the long time proprietor of that very famous Scottish angling retreat, the Altnaharra hotel on Loch Naver.
The fly was first devised as a sea trout pattern for Loch Maree, that's another womans name,but it is now highly regarded as an essential brown trout pattern too.
Wherever my fishing travels take me I always make sure I have a few in my fly box as I know I can fish confidently if I have a kate on my cast. I hope you think my tying does it justice. Please leave a comment and let me know.