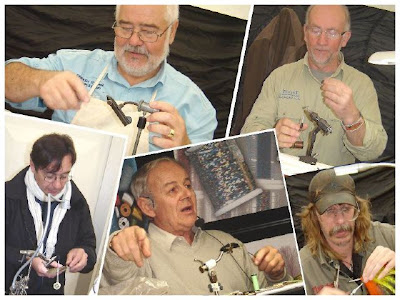 I travelled down to Trentham Gardens for the biggest fly tying event of the year with Elvis Costello, Paul Weller and my brother as companions. Well not quite, “Wild Wood” and “My aim is True” were the cd's of choice for the in car entertainment while my brother was the driver as we motored down the M6 to the BFFI at Stoke.
We got there just after opening time. We paid our entry fee and were immediately accosted by a whole bunch of folk thrusting flyers, cd roms and all manner of leaflets and brochures into our hands.
No matter how much I tried I could not resist a browse round all the trade stands before spending some time in the Tyer’s Row Tent. The first stall I halted at was Coch - y- Bondhu Books. I could have spent a fortune at this stand but I resisted and anyway they didn’t have the book I was looking for which was Stan Headley's , Loch Fishers Bible.
As I wanderd among retailers such as Lakeland, Pearsalls, Cookshill etc etc I noticed a few well known faces such as Mike Harding, Oliver Edwards, and Dean Andrews who plays D.S Carling in the BBC drama, Life on Mars. They appeared to be enjoying themselves as I was too even though my money was dissapearing out my wallet faster than a hungry trout snatching at a Clan Chief in Hillend Loch, as I gave into temptation at the vast array of fur, thread and feather on offer.
Wallet emptied I made my way in among the flytyers and demonstartion theatre. It was a pleasure to mingle among the fly tyers from all across Europe and the USA. I have a great regard for traditional wet fly tying so I searched out Trevor Jones and George Barron for a one to one chat about tying my favourite style of flies. George was great, he talked about his next article in the FFFT mag and also spoke about his experience in the tying theatre last year. They passed on some usefull information to me too and also tyed a couple for flies for me too. I was really impressed by the tyers who were creating Classic salmon flies , they were real works of art. The huge pike flies I saw were amazing as were the realistic creations which you would have swore blind were the actual insects.
While my brother went of to join the Fltyers Guild I joined the public in the Tying Theatre where I watched demos from Paul Little, Steffan Jones and Oliver Edwards. Paul Little’s demo was interesting but was mainly concerning salmon fly techniques although he explained these tips and tricks could also be incorporated into wet fly tying too. The Welsh lad Steffan Jones tied sea trout flies. I really enjoyed his demo. He appeared to be a natural at instructing as he was as excellent at explaining etc as he was at tying. We later found out when we were talking to him in tyers row that this was the first that he had ever did such a tying demonstration. You would never have thought so as he came across very good indeed.
Olivers Ewdards closed the tying theatre with his demos. Very good as ever but I did get the feeling he was going through the motions as he came across a bit blazae , maybe it was just me. I suppose he is getting on a bit, He’s been there and done it kind of thing. He did say that this would probably be his last time at such an event.
I had one last jaunt round the retail stands before we departed and headed for home. Will I be back next year? I’m not sure. I did enjoy the experince but that’s two year on the trot and it’s a lomg way to go to watch blokes tying flies. Next year the event is being switched to a different location and it will be happening in the summer. I am of the opinion that this kind of event is best suited to the winter once the fishing season is over.
As I sit and finish off this article I can see , out of the corner of my eye a whole bunch of new tying materials sitting on my tying bench brought back from Stoke which I am looking forward to using and sharing the results with on my blog.