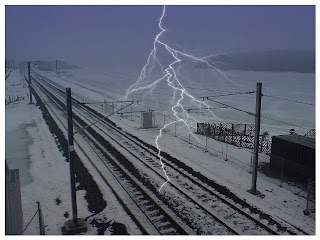 Although not entirely angling or fly tying related I feel this latest post might be of interest to fishermen in the Central belt who fancy a day out at Hillend this year.
The new electric rail link between Airdrie and Bathgate is now open. Not only will it be of benefit to commuters between Glasgow and Edinburgh it will be a real good opportunity for anglers travelling from the East and West to leave the car behind and catch the train to Hillend. A new train station is under construction at Caldercruix which is only ten minute walk away from the Loch.
The new stations at Drumgelloch, Caldercruix and Armadale are not quite ready yet due to the bad weather but will be open by the start of the new fishing season once the severe weather we are experiencing at the moment has ended.
The new link connecting the West and East of Scotland was constructed along the old cycle path which replaced the old railway line which ceased operating in 1956 as the line was deemed to be uneconomical.
The link was funded by the Scottish Government and is expected to open up new economic and educational opportunites to those living along the route and offers an alternative to commuters using the M8 Motorway between Glasgow and Edinburgh.
The railway runs along the South shore of Hillend Loch which gave our Angling Club a few headaches as the construction of the line meant the several access points to the Loch on the South shore that anglers were used to using were no longer available. A footbridge and car park were built close by the Angling Lodge giving direct access to the Lodge and the Loch. The only other access point to the South shore is by way of the Yaughting Club. A new road was also constructed at the east end of the Loch leading to the Angling Lodge. Another positive outcome was that another new road was constructed leading from the Limerigg road direct to the North shore. Access to the North shore was always a bit of a trek for anglers but not now.
I haven't taken a trip along the rail line yet but hope to do so soon as it's been a while since I had a day out in Edinburgh.
Hope you found this post interesting and that the next time you are thinking of angling at Hillend buy a ticket and catch the train....