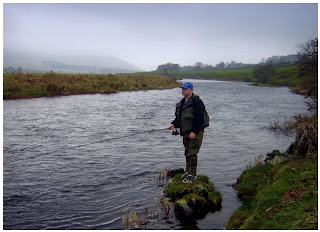 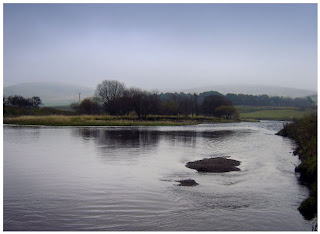 Today I returned to the scene of my first real success at the grayling which was two weeks ago now.
We arrived at Abbington Services in the dark about seven o clock, we had a coffee and a bite to eat and waited for the sun to rise. As daylight broke it revealed a very grey and overcast sky. We soon made our way over to the river.
This time I didn't have the expertize of John by my side to assist me. This time I took along my friend Scott who is also a novice at the trotting lark. I had told him all about my last time on the Clyde two weeks ago and how great it was so I was putting a lot of pressure on myself as I had made it sound as if we were bound to have success.I set up my trotting gear as before but with a little more length below the float as the water was higher than the last time but it wasn't really all that dirty. I had a maggot on the bottom and the pink bug about ten inches above that with the weighted shot in between.
After only fifteen minutes or so I was into a fish sadly it was not a grayling but a nice wee brown trout which was fooled by the maggot.After a quick pic it was released back into the river. I fished on and soon after Scott was into a fish this time it looked a more substantial sized fish that mine but once again it was a brown trout and this fish was duped by the pink bug. As I hurriedly made my way along the bank towards Scott to get a pic of his fish the trout managed to wriggle away from Scott as he held it in the water so unfortunately we didn't get a photo of it.
We fished on for an hour or so but no further fish were caught. Today the weather was quite different from my last trip and because it was so dark and grey I struggled to see my float at times which wasn't a problem the last time when it was bright and sunny. I was using an orange tipped float . I was wondering if someone could advise on which colour is best for dark overcast conditions? I was thinking black might be a good colour.
We next moved onto a couple of other locations on the river that were reccommended to me by John but alas I had no more success.Scott and I really enjoyed ourselves and once again it was a big learning curve for both of us. It was just great to be out there!