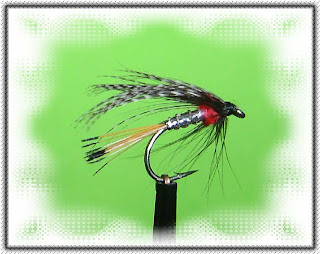 Well that's all the festive giving and receiving over for another year. Therefore I've now got time to concentrate on my blog again. For over a month now I have had problems with my pc but all issues are resolved now because Santa/Val got me a new one.
Over the last week or so I have tied various style of flies so I thought I would share one of those patterns with you. Its a fly you either love or hate. The Peter Ross. Its amazing how many fishermen will tell you that they have never caught a single fish on this pattern but there will be just as many who will tell that they would never be without it. I like to use this fly on Highland lochans I have also had success with it at Hillend too.
There is an enjoyable and interesting account of the use of this pattern in a chapter titled 'Peter and I in the Corrie Halloch' in Robert McDonald Robertson's wonderful book called Wade the River Drift the Loch. You should really try and get a hold of this book it really is a delight.The Peter Ross was devised by a Killin store keeper of the same name as a variation of the Teal and red. I imagine it represents small fry. It also has a reputation for sea trout as well as browns. Go on give it a chuck in the new season and prove the doubters wrong.