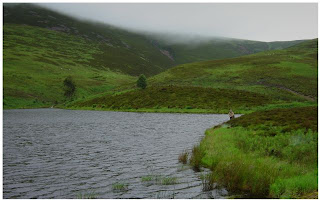 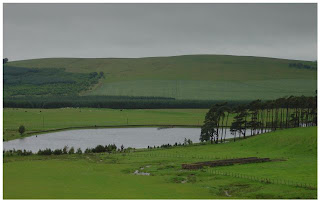 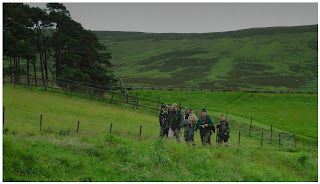 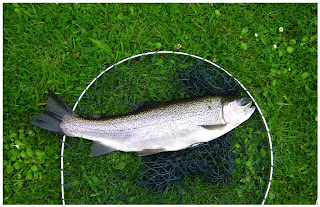 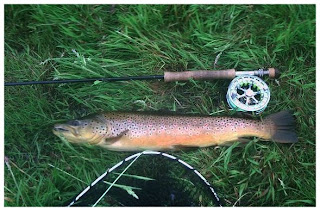 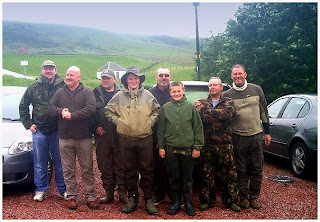 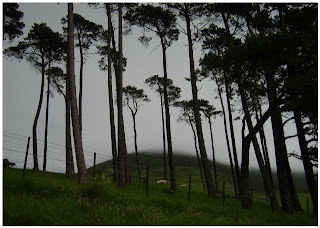 I woke on Saturday morning to the sound of a typical Scottish summer. Aye! the wind and rain were battering my window. The weather wasn't going to stop me going on the Clyde Forum Tinto day though. I arrived at the Tinto fishery just after 8am and the others arrived soon after. The eight of us split into two groups of four. Me, John T, Pioneer and Gadgerman went up to the Cleuch for the first session while Euan, Geo, Stan and Bill fished the Lochlyloch
The Cleuch Loch is set in a beautiful hollow below the slopes of Tinto Hill. You would be forgiven for thinking that you were fishing a Highland lochan such is the beauty and solitude of the location.
One we wandered up the hill we set about trying to find the Beauties which inhabit this loch. Conditions were difficult in the driving wind and rain but in between periods when the rain relented I managed to meet some of the residents, In fact on my first cast I was into a trout right away. Every other cast I was hooking and rising fish. In the end I caught dozens of wee broons but I never did manage to make contact with any of the Lunkers of this loch.
We came back down to the bothy for our lunch and met up with the other guys and found out how they got on.
Fed and watered I headed up to the Lochlyloch and was soon into my best fish of the day a fine rainbow of about 2lb caught on a G&H Sedge. It was terrific to see he fish come up to the surface fly. I rose a few more but didn't connect. Just before I ended my day I moved round to the dam and hooked into a good fish, this time on one of the cormorants I tied up recently which ran a fair bit of line off my reel but as I hurriedly tried to gain some control it managed to get off . It felt like a good fish but I will never know as I never saw it as it stayed deep.
Reluctantly the day had to end and I made my way back to the bothy where we all met up to find out how we all got on. I think its fair to say that each and everyone of us enjoyed the day despite the weahter As you can see from the pic above Bill had the fish of the day. A magnificent brown trout from the Cleuch.
Thanks to everyone who came along especially to Bill for organising everything and of course to John and Munro for having us.