Going Back To Ma Troots! 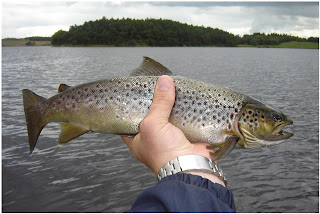 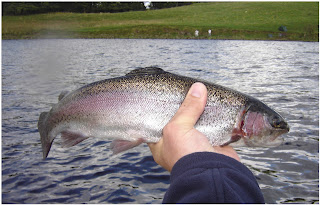 For the last day of my three and a half week holiday from work I had fancied a day at Glengavel but I had stuff to do this morning so I decided I would go back to ma troots in the afternoon at my local Hillend.
I opted for a few hours out on the boat on my own.
Conditions were favourable as it was quite cloudy and there was a lovely wee wave on the loch.
I made my first drift in line with the point of the woods all the way down to the mound however I never saw or touched a fish. I then decided to head right up into the corner where the big moss meets the cycle track and then had a wonderful drift all the way down to the narrows. On the way I hooked and landed a nice brown trout then about an hour later I managed to fool a rainbow. Both fish were fooled by a Kate McLaren on the top dropper. My favourite fly. During the course of the afternoon I got soaked twice as I encountered a couple of really heavy showers. This might sound mad but I rather enjoyed it sitting there laughing out loud as the rain battered into my back. No further fish were hooked spooked or caught and so I ended my afternoon afloat about four thirty. One disappointing aspect of my day on the boat was the cost. It had been a while since I was out on my own and I didn't realise how expensive it was. The cost was £18. Fair to say that was for the hire of the clubs engine and batteries too but I still think its a little bit steep to ask a member to fork out £18 for a solo boat outing. This is not a criticism of the club as I think the club is run impeccably well but I think its something we ought to have a look at because surely being a member should entitle the members to some privileges. An idea perhaps is to reduce the cost of the boats for the members as £18 is rather costly considering that if I had opted for a day bank fishing it wouldn't have cost a penny.
Anyway it was a wonderful way to end my holiday with a couple of fish. Not looking forward to work tomorrow.