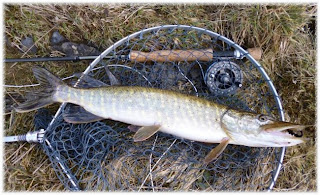 Off I went up the loch this afternoon at about 2 o'clock in what looked like a nice spring day. When I got there the wind was blowing in a westerly direction but it was still very cold especially for this time of year.
I decided to try my luck somewhere along the south shore so off I walked along the cycle path. On my way down the track I met three desperate characters from my work who had packed up and were making their way back to the clubhouse. I spoke briefly to them and it emerged that they had been drowning maggots and worms as well as catching five trout between them.
I continued on my way down the south shore until I reached the Eastercroft Bay. I set up with a Humungous lure on the point and a bibio cloaked dabbler on  the dropper which I tied up last night after watching Davie McPhails latest tying demo.
I spent some time in the bay but nothing was doing so waded round to the area that we at Hillend call the cliffs. After a short time there  hooked into a fish, It had taken the point fly, but I knew right away that this wasn't a trout. I experienced that familiar jag, jag and boring down thing that they do,then after a short fight I brought him to the surface. You've probably guessed by now that it was a pike! yep one of the Hillend Predators. It wasn't a monster just a jack.
I continued on fishing and moved onto the wee moss but without anymore success. As I made my way back to the clubhouse I stopped at the Big Stane and waded into have one last chance. It was then that I felt that dreaded sensation of my right foot getting cold as my boot appeared to be filling with water. Yes, I discovered my waders have a leak. I will let them dry overnight and inspect them in the morning to see where the water is getting in. I sense this is going to cost me as I will probably need new waders.