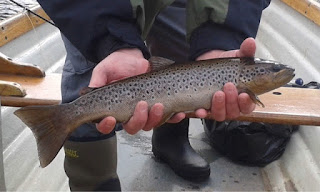 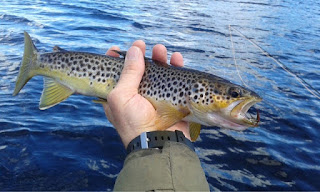 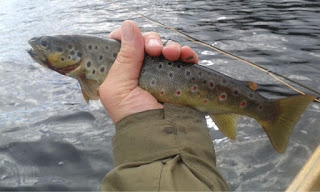 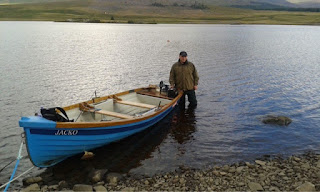 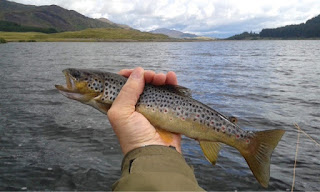 Today I went on my first wild  fly fishing trip of the season.
I never thought it would take me until August to  catch my first wild trout of the year.
My friend Scott and I arrived early this morning at the Laggan Hotel to a arrange our days fishing which we had pre booked at the loch of the headwaters of the famous River Spey which is commonly known as the Spey Dam!
After paying our permit and picking up the oars etc for the boat we drove on up to the Loch.
Once we were organised and got the engine clamped on we manoeuvred up the loch to prepare for our first drift of the day.
It didn't take long for Scott to catch his first trout which was fooled by a heather fly.
It was cloudy and overcast for the first couple of hours and as the day went on the weather got better an better with the sun making appearances more often.
After numerous drifts Scott's tally of trout was mounting up and it wasn't until after he had caught half a dozen that I fooled my first trout of the day which took a Connamara Black.
It was a bit of relief to get that first trout. As the day progressed I went on to catch six more which were fooled by the Doobry and the Loch  Ordie.
I caught a total of seven trout while Scott went on to catch a total of eleven trout. The most successful pattern of the day was undoubtedly the Loch Ordie which took more than half of Scotts haul.
In conclusion there was a total of eighteen fish for the boat which I'm sure you will agree was not a bad return for day out in the Scottish Highlands surrounded by beautiful mountain scenery.