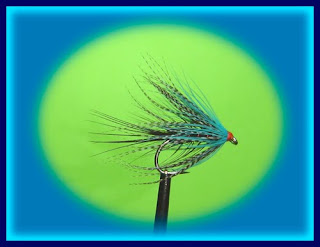 This will be the last fly I tie before the trout season begins tomorrow. Then I will concentrate more on fishing than tying but knowing how much I enjoy tying I wouldn't bet on it.
I have tied this in a style and colour that is well known to be associated with sea trout flies. I haven't done any serious sea trout fishing in my angling career other than one time on the River Ullapool which enters Loch Broom close by the Broomfield camp site. My young son and I were camping there a number of years ago and had a fantastic time fly fishing the pools in the river close to the loch. We caught numerous amounts of hard fighting young sea trout that weighed in around the 1/2 pound mark.
Who knows what the new season will bring. Perhaps I will eventually get some serious seat trout fishing done. I will add that to my things to do list for the new season.
There are going to be too many fishing trips to try and fit into the next eight months.
The dressing for the fly above is as follows.
Hook : Kamasan size 10
Thread : Hot Orange Uni 8/0
Tail : Black Pheasant tail
Body : Black possum ribbed with red wire
Body Hackle : Black hen
Collar Hackle : Teal
Head Hackle : Blue Hen