Last Wild Fish of the Season 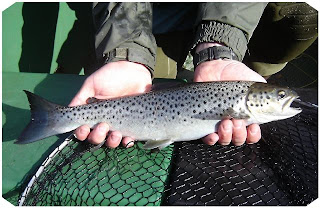 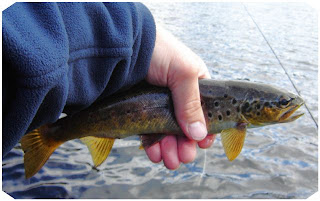 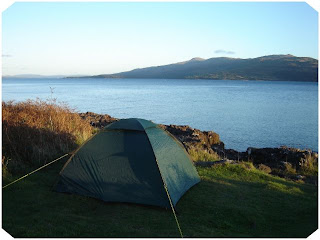 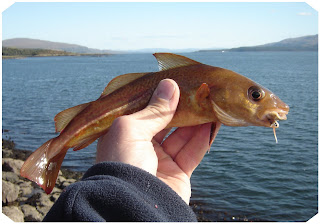 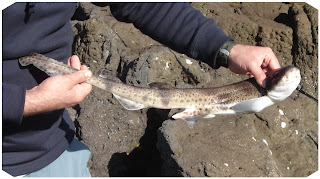 Fly Fishing gear and sea fishing gear was packed. Tent and sleeping bags were on board as well as enough food and drink to see us through from Saturday to Monday.
Scott and I were off on our last wild fishing trip of the season. The destination was Loch Doilet and The Sound Of Mull.
Off we went in the early hours of Saturday morning to catch the first Corran ferry over to Ardgour then drive over to Strontian to meet Peter the secretary of the Strontian Angling association who had arranged a boat and outboard for us to fish Loch Doilet.
On arrival at Doilet conditions were terrible for fly fishing. Bright sunshine and a flat calm over the Loch.Regardless of the conditions we got afloat and got to work on attempting to catch brown trout and also in the hope of a sea trout or two. For most of the day a flat calm lay over the Loch but. The wind did get up a few times but we were forever maneuvering trying to get into the ripple. It was really frustrating continually moving from one drift to the next . I have never been on a loch where the wind direction was so changeable.
We did manage about a dozen brown trout between us which were caught on Silver March browns,zulus and bibios. Scott was lucky enough to get a couple of sea trout at just over the pound mark which were caught on a Teal ,Blue and silver. The fishing was tough and we called it a day in the late afternoon.The fishing wasn't as good as we had expected which was probably down to the conditions but Scott was well pleased with his sea trout.
Off we went in search of a wild camping spot at the Sound of Mull. We were lucky enough to find an idyllic shoreline location on the Lochaline to Drimmin Road.It was a stunning location as you can see from the pic above. After a bite to eat Saturday evening was spent talking fish football and music. Scott's taste in music leaves a lot to be dsired.We watched the sun go down then looked up in awe at a beautiful star filled sky whilst enjoying a beer or two. I saw a shooting star , made a wish but that huge monster of a fish didn't materialize the next day.
We were up early on Sunday morning and set about fishing for what ever fancied our bait and lures. It transpired that a few dog fish were captured as well as a small Pollack, codling and a couple of mackerel.
As much as I enjoyed the camping it had turned very cold overnight so instead of spending Sunday night beneath the stars we decided we would stay the night at the Lochaline Hotel where we could get a good scrub up, a couple of pints and a nice warm meal.
On Monday morning we reluctantly headed for home. On reflection the fishing didn't live up to our expectations but it was a very enjoyable experience all the same.