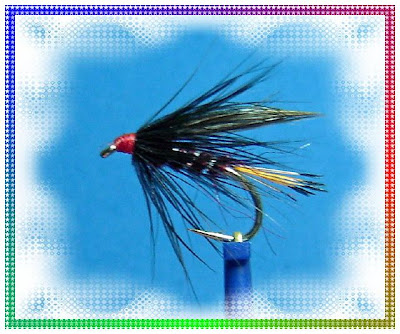 Tied a few of these last night. My favourite style. I really do enjoy tying traditional Scottish and Irish style wet flies. This pattern is a variation on a theme. You may have noticed that when I'm tying I very rarely tie exact copies of tried and trusted patterns I like to tinker with the pattern a little,not too much though as that would render the fly a completely different pattern altogether. The above dressing is basically a Mallard and claret but I have incorporated SLF dubbing as a substitute for seals fur. Its not that I'm against using seals fur dubbing or the like it's just that I actually like the translucency of the synthetic material and dare I say it might even be better than the original natural fur. You will have to excuse the colours in the photo as they as they have taken on a form of their own and I cant quite get them to look like they do if you had to actually see the fly for yourself in your hand. I think I will have to invest in one of those wee portable mini studio set ups for taking photos of flies. There is plenty of advice and information on these mini studios on various fishing forums etc. They are not expensive to buy and can even be set up by oneself with a little bit of imagination and initiative. Anyway I hope you like the look of this pattern and have a go at tying it and fishing it, you might even want to make your own adjustments to it which would be the correct thing to do in the true spirit of fly tying.