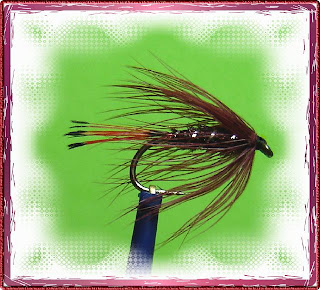 Tonight I was listening to the Hearts v Motherwell match on Radio Scotland and while listening to the game I tied the above fly which is a variant of that well known Traditional wet fly , Black Pennel. I must have been subconsciously influenced by the colours of the Edinburgh club's team colours as on this occasion the variant I have tied has a maroon/claret theme. I think the colour combination will be one that works well as I have had quite a bit of success with claret coloured flies over the years. I am reliably informed by Stan Headley that claret coloured flies should be the anglers first choice in poor light eg, as darkness approaches. Not that I have ever met Stan . I got that bit of information from the Gospel according to Stan..... The Loch Fishers Bible. The pattern I have tied tonight incorporates black tying thread, Orange tippets for the tail, claret peacock herl body with a silver tinsel rib and of course that all important sweeping claret hen hackle.I look forward to fishing this fly in the coming season which is now 89 days away.