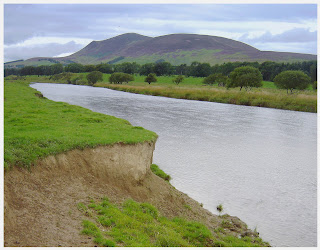 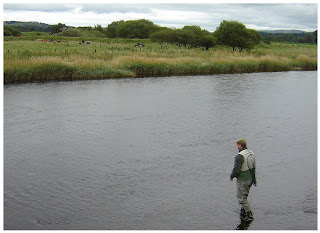 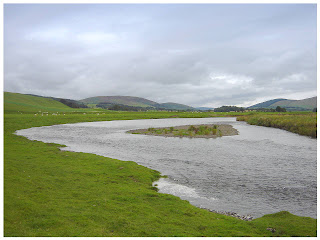 Today I arranged a day out on the River Clyde with Paul, a long serving Hillender. Paul is a regular on the Clyde too and is a member of the Lamington and District club and knows the river very well indeed. Which was just as well, although I have had a few outings on the Clyde in the past, I am by no means confident or competent with all aspect of river craft. Whenever I have fished the Clyde in the past it has always been with wet flies or weighted nymphs, fishing down and across, the lazy man’s way.
Paul fishes the Clyde with his 3-weight rod and the dry fly, a method that I have never used and a method, which from Paul’s experience, is more successful and also fools the bigger fish.
We set off at midday and forty minutes later I was in the Tinto Hotel to collect my fishing permit and soon after was on the banks of the river. Paul very kindly set me up with a tapered leader and tiny CDC dry fly, which I could barely thread with my nylon. Paul was using the same set up too. We made our way along the river, which was very pleasant with Tinto Hill dominating the scene and all the time looking for rising fish. We soon found them. I let Paul show me how to approach them, as I knew I would most probably spook them with my untidy casting. Paul had a few casts at them but the down wind put the fish down.
Paul then went up river while I had a go in an area which had a few rising fish. I found it quite difficult because the nice calm water was showing all the faults in my casting etc. I did indeed spook the fish so I sat down and had a coffee and sure enough while I was resting the water they soon started rising again frustratingly just a few feet away from me. This area appeared to be holding quite a few fish as they were rising the whole breadth of the river. I‘m, certain if Paul or any other experienced dry fly fisher was in among them they would have surely netted a few. After unsuccessfully casting at the rising fish I soon put them down and decided it would be better to leave them in peace and head off to catch up with Paul.
Paul had raised a couple of fish but unfortunately didn’t manage to hook them. We then walked back down the river seeking out some fish, we each had a few cast at some trout but after no success we decided to have a break and a bite to eat back at the car. Once refreshed we found out that we were not the only folk having a frustrating day, as 50, 000 Scotsmen were feeling the same as us at Hampden.
Paul then led us down to another favourite area of his. This time the wind had died down and the river was perfect for the dry fly but for a novice like me it was proving to be really difficult. I now know and appreciate how skilful these dry fly fishers are as it takes stealth and knowledge to fool these Clyde trout. I decided to have a last few casts at some rising fish but without success. We then decided that we were flogging a dead horse and called it a day.
In summary this was a very interesting and enjoyable day on a very beautiful area of the Clyde in the very good company of a man who knows the river well and who was a wealth of information of this particular stretch of river. Thanks Paul! I would like to go back soon before the season ends and put what I’ve learned from today into practice but I’m not sure if I will be able to fit a visit in soon though. Of course, I could get down there a few times over the winter and try for the Grayling.