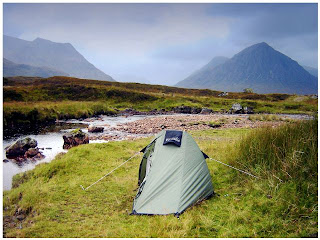 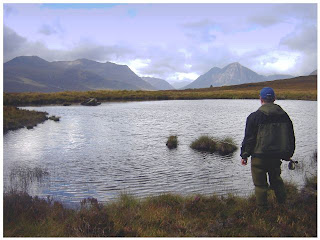 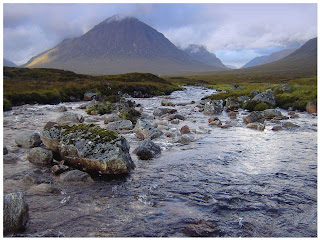 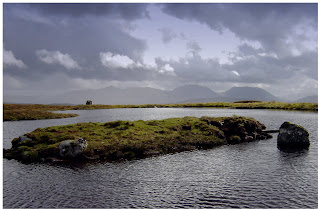 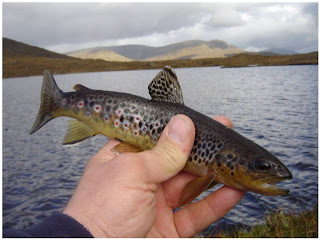 For what would be my last fishing trip of the season to the Scottish Highlands I decided I wanted to go somewhere wild, desolate but beautiful, I chose to fish a wee lochan on the edge of Rannoch Moor with an overnight camp by the banks of the infant River Etive.
Scott and I arrived at the Kingshouse in complete darkness early on Saturday morning. While waiting for the sun to rise we had some coffee and a bit to eat in preparation for the four-mile hike into our desired lochan.
This was my second visit to this loch which lies in a col between two hills at a height of 1,276 feet but the last time I was there I didn’t own a mobile phone, a pc, a GPS, oh and I didn’t carry so much weight back then either, it was actually about twenty years ago.
My memories of this lochan were that I had caught numerous small very dark trout but peculiarly I also caught a good wee half pounder that was bright and golden in colour, very different from all the rest of the trout I caught that day. I remember being puzzled at the time, as it was not the sort of trout you normally find in peaty moorland lochans. I suspected that the local estate perhaps stocked this lochan occasionally for guests, as there was a wee boatshed with a boat moored at the south shore.
Therefore I was curious and excited to find out if this wee lochan was just how I remembered it.
The walk in took us about an hour and a half with numerous stops to take photos of the surrounding mountain and moorland landscape. On arrival at the lochan we noticed that there was indeed just as I had remembered a wee boat shed complete with boat. It appeared to be quite new though with no signs of weathering or rust.
We sat by the loch for a while taking in the wild landscape then decided to get our rods stringed and have a wander round the loch in search of trout. The weather was ideal as it was cloudy with a light breeze and the odd wee drizzle of rain now and again.
It didn’t take long to make contact with the inhabitants of the loch as they were soon splashing on the surface, chasing my flies and getting captured on both my point fly and dropper. I have to admit that these fish were quite small but the takes were quite aggressive and they were fun to catch. We encountered fish all round the loch and enjoyed ourselves thoroughly, taking a break every now and again to take in the vastness of the area and also take many photos. Curiously though we never came across any bright golden trout like the one I caught all those years ago. We came to the conclusion that there must be decent sized trout in this loch somewhere, as someone wouldn’t go to all the trouble of putting a boat on this loch for the purpose of catching dark bandy trout.
After five or six very enjoyable hours of bandy catching we called it a day and walked out from the loch. As we hiked back to the Kingshouse we were wondering where we would camp for the night as the area around the Kingy was a bit grubby and busy.
It had been a long day and we were feeling a bit weary as we trudged along the track. Then unbelievably we had a wonderful stroke of luck that would solve the mystery of the golden trout and also a solution to out camp for the night.
We met a man from the estate who was repairing the track. We stopped and chatted for a while. He asked us if we had caught much and where we had been. I told him about the fish I had caught from the loch all those years ago. He was very pleasant and told us that we actually should have arranged to fish the loch through the estate. We apologised but he told us not to worry. He then explained that the estate stocked the loch in the past but not reently and that the boat belonged to them. He was a really friendly chap and also told us he was a member of the Glencoe Mountain Rescue team and was also a keen fisherman He told us all about the deer stalking etc. It was all very interesting. He then very kindly told us that if we were looking for a place to camp that we could bring the car into the estate road and pitch our tents next to the river. We thanked him and he told us that the next time we fancied fishing in the area that we should call him and he would give us some pointers on where to go.
It started to rain so we said our goodbyes and were soon off again. By the time we reached the car we were soaked so headed into the Kingy Climber’s bar to dry off and down a few welcome pints of Black Gold Ale. With the permission of the Keeper we then drove back up the track we had just walked down and set up camp at the river with the Buachaille dominating the downstream view. We ended our day with a meal of Noodles, Soup, Whisky and Beer. It was late when we decided to bed down for the night. As I lay in my tent, I reflected on a very satisfying and interesting day and felt safe in the knowledge that the Big Etive Shepherd was watching over me as I slipped off into the land of nod.