A Hillend Ke He. 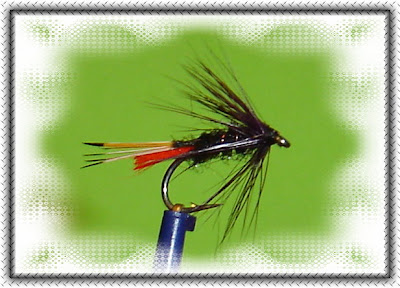 Earlier in the week I had another outing on the River Clyde. With a box of newly tied sparse spiders I chose to have a go in the Clyde Valley near Crossford. First I tried above the bridge at Crossford and then various locations down stream from the bridge. In short I caught He haw. I put it down to inexperience and low water I did get some nice pics though.
Tomorrow I intend having a day up at Hillend Loch and therefore have been at the vice tonight tying a few loch flies that I fancied using after watching Davie McPhails latest video. The pattern above is a variant of the Ke He. This pattern was devised for use at Loch Harray on Orkney where it earned a great reputation for trout. It's popularity is now widespread and is used by anglers all over the country. Tomorrow it will be one of the various patterns I will have on my cast at Hillend Loch.