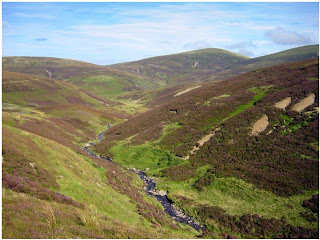 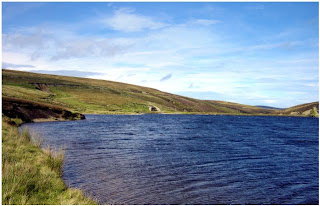 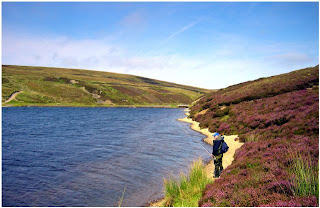 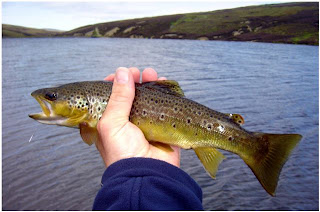 All I can say about the location of my day out fishing today is that I went South. Scott and I set off this morning but got caught in heavy traffic as we tried to get out of town. So later than anticipated we managed to escape the rush of people going to work and doing the school run etc. It was pleasing to watch the urban sprawl turn to winding roads, green fields and purple and brown hills as we travelled onwards.
It was about ten o'clock when we arrived at out secret hill loch. This location is a real gem of a place and would hate to see it get popular . I know it might be a bit snobbish trying to keep this place to myself. Don't get me wrong others do fish it but not many and its better that it stays that way.
I set up with a muddler and a Kate McLaren and got a few offers but nothing stuck. I changed several point flies and put on a pink tailed Loch Ordie on the dropper. The change of dropper worked on its first cast as I caught a nice 1/2 pound brown trout. I soon hooked into another fish which looked bigger but it eventually won the fight as it threw the hook. Then it all went quiet for a while. The wind got stronger as the day progressed and it became difficult fishing my way down the shore.
I decided to head back up to the top of the loch again and changed over to a team of spiders. The change worked a treat as I hooked and landed another two trout. I then worked my way back down the loch rising another couple of trout but no further trout were caught. Now it was time to head home as Scott was going on night shift so we reluctantly broke down our rods and shouldered out rucksacks then headed out the hills back to the car for the drive back to the bricks and mortar of our hometown.