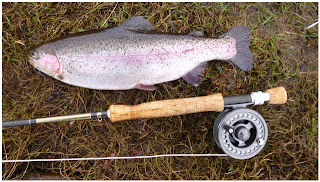 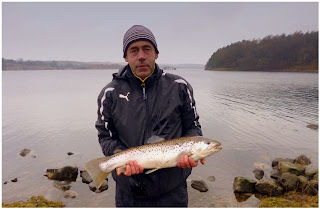 I manged to get out on the loch for the first time yesterday and then again today. The weather was atrocious on Sunday afternoon when I arrived so I sat in the clubhouse for a while then had a wee nap in the car as I waited for the rain , sleet and snow to cease.
I then set up and tried various southshore locations for trout but had no success.
So off I went this morning back to the loch on my way round to the boathouse bay I met two work colleagues , Tam and Iain who were fishing at Teds tree. After a wee chat I walked round into the bay and set up with a gold headed black lure and a cormorant on the dropper. Once again the weather was making the fishing uncomfortable with swirling wind and the odd snow flurry. after half an hour or so I made contact with my first trout of the season which was fooled by the dropper fly. Not the prettiest rainbow trout by any means but it was welcome all the same as it was my first fish of the season.
After landing the fish I stopped for a break as my hands were numb with the freezing conditions and warmed them with a nice wee pot of soup which I cooked on my portable stove.
While I was having my soup Tam and Iain joined me in the bay. I never caught any more fish although I did get a good take which I failed to hook into. Just as I was about to leave Iain hooked and landed a magnificent brown trout of 6 1/2lb which put my 2lber to shame. Iain was fishing Hillend for the first time and Im sure its a fish he will never forget.