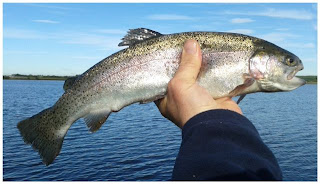 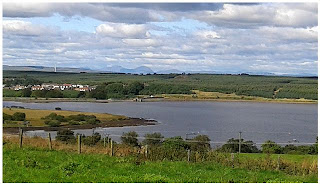 As I said in my last blog post I haven't being fishing much recently, well since that last article that statement still remains the same. Well with the end of the season fast approaching I thought I had better make the most of the next few weeks so off I went to Hillend on Saturday morning for the first time in a while.
The weather was very pleasant as I walked along the south shore which looks in a terrible state as the water level at the moment is very very low. In fact its the lowest I've seen it in about ten years or so. It doesn't look its best with all the mud and bog showing. The above pic taken during the week form a hill to the south of the loch will give you an idea how low it actually is.
I stopped at the Eastercroft bay just round from the cliffs and sat for a while. I noticed a few fish splashing around so I made a few casts at them but to no avail. I fished on for a further few hours moving around a bit and trying various areas.
I then went back to where I started and once again I saw a few fish rise. I made a few casts at them and low and behold I hooked I netted my first Hillend fish for weeks. Not the prettiest fish but a welcome one all the same.