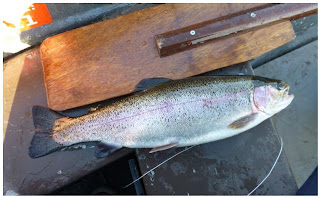 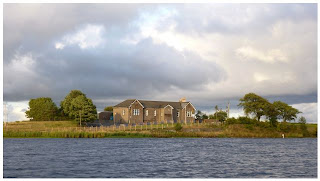 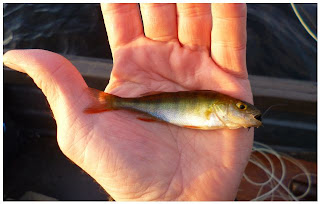 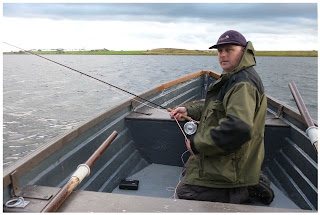 I've not had much to write about recently as I've not been fishing much. I was last out a couple of weeks ago at Hillend on the boat but my time on the loch was uneventful.
Therefore I was keen to get out today at the Black Loch. Alex and I arrived at the loch just before 5pm and when I went to the bothy to tell them I had booked a boat the chap asked if I was "aff ma heed" The reason for him questioning my sanity was perfectly reasonable as there was a fierce westerly blowing right down the loch. Regardless of the weather we went out on the loch with the hope of catching fish and the weather improving. Our hopes of the wind improving were fruitless as it persisted all night but our encounters with the fish were a little better.
Alex was first into a fish which took a Daiwl Bach but he lost the fish in the ensuing fight. It was a while later before I made contact with a trout I was fishing a big bushy Loch Ordie and a wet daddy when a trout was fooled by the daddy. The fish gave a good account of itself before succumbing to my net.
It was interesting to note that there wasn't any fly life around and come to think of it I never seen any so it was no surprise that I never seen any fish rising. I next caught a micro perch which was keen on my dabbler then the most exciting moment of the night happened as we were about to pack up and head back to the jetty. I decided to have a last few casts in the bay next to the boat moorings. Bang! A huge trout lunged at my flies and made off at a fair rate of knots it then leapt from the water and made an almighty splash! Blast! the damn thing broke my leader at the top dropper so once again another trout had taken a fancy for my wet daddy however this time the trout got to keep my fly as it disappeared into the depths.
Soon after it was getting dark and very cold so we called it a night.
It was great to get out fishing again and get some trout excitement. Its what makes me want to go back fishing time after time.