September 27, 2017
Tuesday the 26th Sept I headed up North to the Spey Dam for the second time this season, on which will probably be my last outing of the season.
On this occasion my mate Scott came along with me.
Once we had uplifted our permits and oars etc from the hotel  we made the short drive up to the loch. On arrival at the banks side boat moorings there was a brisk easterly wind blowing down the loch and the surrounding hills were covered in low lying mist.
The loch was extremely high, in fact it's the highest we have ever seen it.
As we were getting ready a big jeep pulled over, We thought it might be the gamekeeper or the warden but it turned out he was the Dam manager and he explained that a survey was being conducted on the loch and that the height of the loch had been deliberately raised over the last couple of days
to enable them to do their work and told us that various objects had been placed in the west of the loch and if we encountered any , to give them a wide berth as they were instruments for recording the current.
Suitably informed we loaded the boat with our gear, strung our rods and off we went out on the boat , making various drifts in and around the Island the along to the west end of the loch.
The fishing was tough and as the wind prevailed we began to get cold.
It was a while before we encountered any " Troutaction" Scott was first to fool a fish, a nice wee half pounder which took a soldier Palmer.
Eventually I got in on the action too a wee while later with another half pounder which was fooled by a size 12 Clan Chief, unfortunately the trout jumped out my hand as I reached for my phone/Camera.
We noticed that another couple of anglers ventured out on the other boat but they weren't out for long as we saw them haul the boat ashore about an hour later.
We struggled on with just a couple of more takes for all our efforts.
As the wind got higher we decided to take a break for lunch.
Suitably refreshed we ventured out again.
As the afternoon went on the mist lifted a little and the wind was changeable.
The both of us managed another trout each, again nothing much more than half a pound. My second trout was fooled by a fly I recently tied for my sadly, ill fated trip to the Outer Hebs, an orange and black muddler. Scott's second trout took one of our favourite flies for this loch, a loch Ordie.
At about half past three we called it a day and headed back ashore.
It was a real tough day's fishing with just the four fish for the boat and a few takes for all our efforts.
As we packed up back at the car we were approached by another jeep, this time the person introduced himself as the Loch Warden. He was a nice decent English chap but as the conversation went on it became clear that he was more than a warden as he gave us a business card and explained he ran a angling guiding business.
It was obvious he was out angling for clients/mugs.
Scott and I had to laugh when the guy said to us, and I quote " I should be charging you money for this" as he explained to us the areas to have a drift etc.
Turns out he has only been in the area for a year, and we reckon we should have charged him money for all the info we unwittingly gave him from our experience of the loch over the last few years. Ach never mind he was harmless and I suppose everyone has to earn a living somehow!
The fishing was hard but that's just part and parcel of what fishing is all about. Life can be tough and believe you me its been difficult these past few weeks. Being out flyfishing on a highland loch puts everything into perspective.
On the few hours drive home I reflected on a very satisfying day up the highlands with a little "Troutaction" thrown in for good measure. 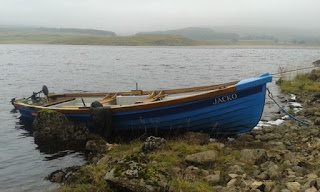 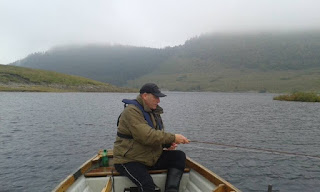 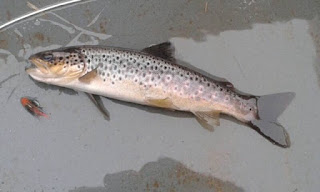 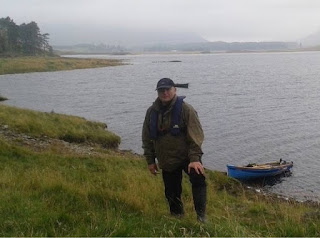 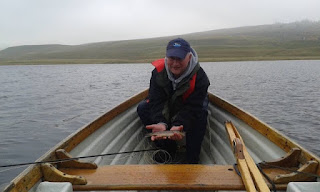 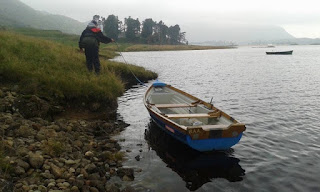