The Old Man of Cruix

September 19, 2017
Situated south of the village of Caldercruix lies the famous "Old Man of Cruix" figure which was carved many years ago into the windswept sandstone rocks which are prominent along the North Shore of the Lily Loch.
Legend has it that a young apprentice from the nearby quarry produced the sculpture with great skill and perseverance and was eventually completed in 1314.
The magnificence of the work has been somewhat eroded over the years by the weather, however the distorted, weather beaten face of the Old Man of Cruix or as he is more commonly known The Cruixman, can still be seen to this day, if you know where to look!
The Cruixman is said to depict the face of and Old fisherman from the village as he looks out over the loch, laughing and mocking the anglers on the loch as they pack up and trudge away off home, Piscatorially challenged.
Many anglers have reported that the mocking laughter of the Cruixman can often be heard, carried in the wind as they head up over the hill, back to Hillend........ Im sure I heard him today! 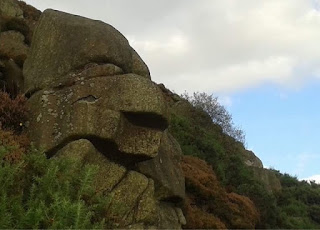