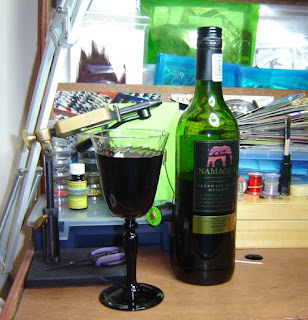 What has a bottle of fine South African wine got to do with fly tying I hear you say. To be brutally frank ,Nothing! other than that I enjoy a few glasses while idling the night away with tinsel and thread. As in all cases it is best to enjoy it in moderation because if you don't heed caution you might end up something like one of Hillend Loch's elderly gentleman. I don't think Old Bob Graham will mind me sharing his wee prose,titled "My Flies"The message here is Don't Drink and Tie. But that wouldn't be as much fun would it?

My fly tying ability and the quality of my flies may, I feel, be affected by my drinking habits. But then, as long as I catch the odd fish and get a good night's sleep I'm not too worried.

So I set up a hook in the vice and ran on some thread and poured out a good half of whisky. I caught in some silver ribbing and a tippet then added some dubbing and went back up to the head where I tied in a black hackle, wound it down the hook and secured it with the rib before tying in a natural game hackle. As Kate Maclarens go it was only fair.

I poured another half, ran on some thread and followed up with the ribbing, tippet, dubbing, black hackle and game hackle procedure and considered another slightly better Kate Maclaren. After another half the third one looked much better.

I poured another tippet, threaded a dub, hackled a rib and blacked a game and soon had another Mackled Karen that looked perfect. Thus encouraged I whisked another dub, halfed a game, kated a rib and tippexed a hackle to produce a lovely Cackled Man.

I ribbed another pour and stopped to check. I had fifteen mankled kans and a natural hen was rising in a table that was floating in the garden. Just to be sure I checked again and saw a table rising in a dub to twenty six rankled macks.

Then I went to bed and dreamed of rising hackles