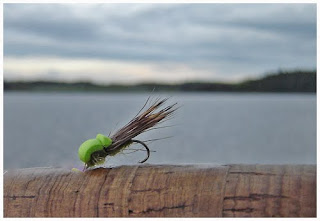 I tied up the above fly today for use at Hillend tonight. The response to this balloon caddis pattern was tremendous. After only a few casts near the area known at Hillend as the cliffs I was into a nice trout which leaped three times from the water and put up a great heart stopping fight. Tonight that trout won, as just as I was fumbling about trying to get my net at the ready the fighting trout won his struggle as he through the hook and deservedly swam away. He needn't have worried as I was going to return him to the Loch anyway.
I fished on for another hour or so and had half a dozen takes and rises to the balloon caddis.
The great red sedge hasn't made its annual appearance yet but when it does I'm positive this pattern is going to be the most successful fly in my box over the next couple of months. It's so buoyant and makes a lovely tempting wake on the surface of the water.I'm going to be busy at the vice this weekend, tying up this pattern in various sizes.