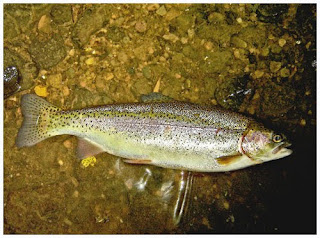 As the world cup has yet to capture my imagination I decided to give the Mexico v France match a miss last night and instead I decided to visit Hillend in the pursuit of excitement. I wasn't disappointed. I arrived at the Club house to see and hear fishermen, mostly maggotdrowners, leaving the Loch and bemoaning the fact that they had failed to catch or even see any signs of fish. I knew it was way to early for the sedge to be hatching ,hence the lack of fish activity. I decided to wait a while before I would attempt to persuade the trout to my flies. I sat outside the clubhouse with a cup of hot soup and a couple of sandwiches and watched a couple of frustrated fishermen try in vain to catch fish. At about 10 o'clock I set up my rod and reel and attached a balloon caddis to my leader.The odd big sedge was making an appearance. So I began to cast . for ten minutes or so I had no offers but the sedges were appearing in increasing numbers much to the delight of a couple of ducks who were feasting on them. By now the fish were starting to appear and rising at the sedges. It wasn't too long before I caught my first trout, a rainbow about1 1/2lb. Then I hooked and lost another. Every other cast the trout were coming up for my fly. Eventually I landed another , this time about 2 1/2 lb. After that I had numerous takes and rises to my fly but no more trout were landed. It was well dark when I decided to call a halt to the fishing. I offered my two rainbow trout to Davie, a Hillend regular who gladly accepted them and said they would be going into his smoker in the morning. All in all it was another satisfying evening at Hillend.
Tonight though! The football will be taking preference to the fishing as there is a rather important football match being played in Capetown tonight.