Postcard From the Lily Loch 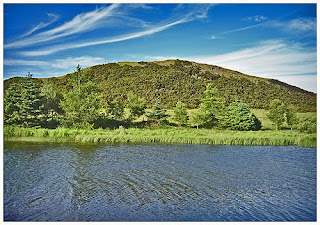 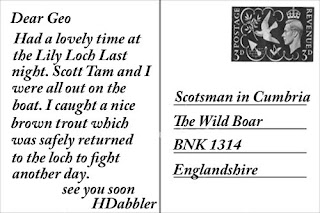 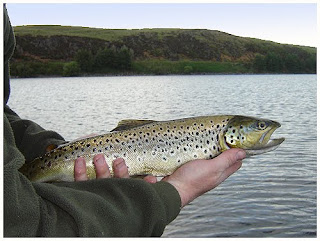 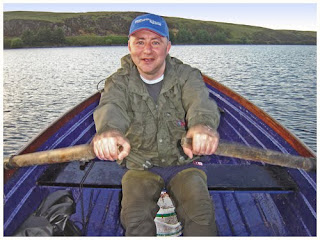 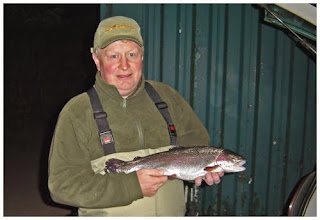 Tam, Scott and I went up to fish the Lily Loch last night.I arrived there before them and fished for about an hour without success in the burn area just at the back of the Club Hut.When my friends arrived we got geared up and got the boat ready in preparation to hunt down some trout.It was a bit windy to start with but as the night went on the wind did ease a bit to make fishing from the boat a very pleasant evening.
Tam and I were first out on the HMS Lily while Scott fished from the bank at McKenna's point. Tam rowed us up to Scunners point and had a few drifts from there from west to east.There wasn't much activity in that area but Scott was shouting out to us that fish were rising near him . So were maneuvered ourselves over to the big weed beds and drifted down past Scott. It was here that I caught my one and only fish of the evening a nice brown trout about the 2lb mark which after a quick photo call was released back into the loch.Once again my successful fly was the balloon caddis.
Soon after Tam disembarked and fished from the shore while Scott joined me in the boat. We had numerous drifts which resulted in no more fish but Tam was having better luck. He had great sport with four rainbow trout which were all fooled by the Balloon Caddis. This fly is getting a bit of a reputation these days at Hillend and the Lily , so much so that after Tam spoke to a very experienced Lily regular today, asked if I would tie some up for him, which won't be a problem. I'm going to be very busy at the vice over the next few days as this pattern is proving to be very popular.
We decided to call a halt to the fishing at around midnight. I thoroughly enjoyed myself and can't wait to have a go at the Lily some time in the future.