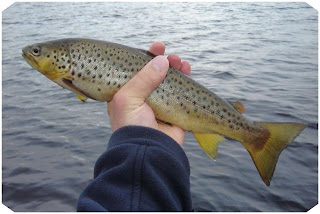 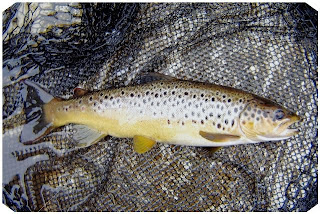 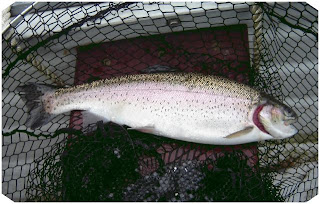 My last outing on the boat at Hillend this season turned out to be a very pleasing day of angling.
Scott and I went afloat together while Tam and Craig were on another boat.Before setting out we could see that lots of fish were getting caught from the bank across fom the clubhouse along the narrows.I would imagine that these fish, since they were so abundant in this area were the newly stocked fish this week. We like to try to get in among the natural head of fish at Hillend so we moved as far as possible from the over anxious anglers at the narrows and headed for the west end of the Loch.
We had a couple of drifts from the corner of the dam towards the Speirs Island two fish were caught a rainbow for Scott and a Broonie for me. We then moved to the other side of the island and drifted down towards the Shields Burn on this occassion I caught another broonie and a rainbow while Scott managed a perch.We both missed three or four fish each and I also had a fish on which eventually broke my leader ,I reckon it must have had a wind knot in it as it snapped above my top dropper.The other boat landed Perch, trout and a jack pike, numerous fish were missed and lost also. Before calling it a night we had a couple of drifts into the boathouse without even a bite. At 7.30 we headed back to the boat moorings and then onto the clubhouse for a coffee and a gab.Looking forward to getting out on the boat more often next season as I have really enjoyed myself afloat at Hillend these last couple of months.