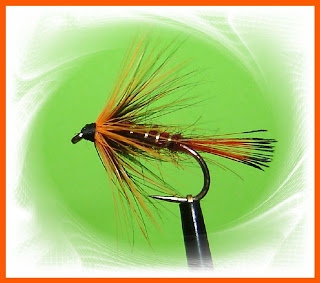 Tonight as I look out my tying room window the picture is of a winter wonderland well not quite as after all I'm from Airdrie. My car lies buried beneath quite an accumulation of snow and my thoughts have been drifting back to hot summer nights fishing wild Scottish Lochs so I thought I would share a fly I had success with at Loch Watten back in July, the very amusingly named Dirty Weeker.
I have wondered for some time about where the name comes from,Well it apparently is a corruption of a phrase the evolved during the town of Wick's Herring days. It was not as you might think a derogatory term which pokes fun at people who dinnae wash. The original word was "Dirdie" a Caithness word meaning busy. Over time it was corrupted to dirty and somehow adopted by locals endearingly referring to each other as "Dirty Wickers" meaning a real Wicker.
The Dirty Weeker is a fly that originates from Caithness in the extreme far North of Scotland.This pattern was devised by Hugo Ross from Wick who has an angling business in the Northern seaport. The fly is synonymous with the angling tradition of wet fly-fishing at Loch Watten, arguably Scotland’s finest venue for traditional loch style fishing. I have seen various different fly patterns which claim to be Dirty Weekers so I was not entirely sure about the exact dressing therefore I made a few enquiries on some angling forums and after searching through some angling books the overall collective opinion was that the original dressing was as the above pic shows. Hot orange tippets, claret seals fur body, oval gold rib, a cock hackle with an orange hen hackle in front and of course black tying thread on a size ten or twelve hook.
Stan Headley recommends this pattern in his excellent Loch Fishers Bible for fishing at Loch Watten which is as good a reason as any to have a supply of them in your fly box.