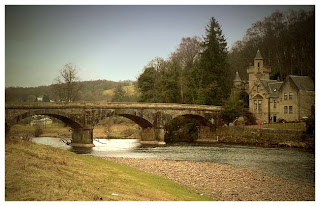 With the trout season fast coming to an end my thoughts have been turning to the Lady of the Stream; The Grayling. My success at Grayling fishing has been limited to say the least. My best grayling was taken from the River Clyde at the Mauldslie Estate a few years ago, it was all of half a pound. This year I intend to try and better that. A few years ago I was given the following information from a friend. I have no idea where he aquired this but it gives a great insight into the introduction of Grayling in Scotland...
Some would argue that the Grayling is not truly Scottish, as its only 156 years since it was imported from the Midlands of England. Indeed many fishermen, from south of the border have complained bitterly about the introduction of the Lady of the Stream in Scotland.
Be that as it may, the grayling gives excellent autumn and winter sport in a number of rivers north of the border.
The full story of the spread of the grayling in Scottish rivers has not been recorded in recent years at least. Despite the fact that parts of the story are not known in detail, the information that is available is worth telling, partly because of it’s historical value and partly because it tells of a degree of success that is surprising considering the then current knowledge of fish culture.
The first of the immigrant grayling received special treatment and an impressive welcome. On the 5th of December 1855 the mail train made an arranged stop to allow the fish to be unloaded in the Lanarkshire village of Abington on the banks of the River Clyde. The welcoming committee included prominent Glasgow businessmen, one of whom, George Anderson, was later to become MP for Glasgow.
Victorian Glasgow was a hive of entrepreneurial activity which spilled over into the affairs of associations such as the West of Scotland Angling Club of which George Anderson was a member. In fact as member in charge of the “Grayling Experiment” he arranged for three dozen healthy 1 ½ year old grayling to be transported from Rowsley, near Derby to Abington on Clyde. Only three of the fish did not survive the journey and the others were introduced to the River Clyde.
The fate of these fish and the success of that part of the experiment are not known. There were reports of a few grayling being caught in the next few years, including one story which claimed that a grayling of 3 ½ lb had been captured, but we shall probably never know whether the introduced fish spawned successfully since any effect that they had was probably swamped by the second phase of the experiment.
A second delivery of Grayling were transported to Abington and despite the set back of a number of fish escaping from the zinc screen tanks into the river this phase of the experiment was considered a success as some of the 160 fish were retained in a pond as brooding stock. A few of the grayling were forwarded to the vicinity of one of the upper Tay tributaries with the intention of stocking a whole system of streams including the noble Tay. The remaining fish were released into the Daer, the main tributary in the upper area of the Clyde. Concerns were expressed about the survival of grayling when introduced with the large indigenous trout in this area.
Despite such misgivings the venture did succeed and the grayling did indeed spread throughout much of the Clyde system. It was ironic that very few grayling seem to have been caught by those responsible for their introduction. The West of Scotland Angling association showed commendable restraint and did not hold their first grayling competition until 1863. On that occasion the total catch was two grayling weighing 9oz and 13oz. Subsequent competitions did not appear to have a higher catch rate, despite the fact that good catches were being made elsewhere by others not involved in competitions.
Anglers in other areas were impressed by the success of the Clyde grayling experiment and as a result stock were sent elsewhere. In a letter to the field in 1861 George Anderson offered to supply grayling to other areas and requests came as far a field as County Cork in Ireland. History might have been different if that request had been followed through; as to this day there are no grayling to be found in Ireland. Unfortunately the remainder of the story was not so well documented and firm evidence has proved hard to find.