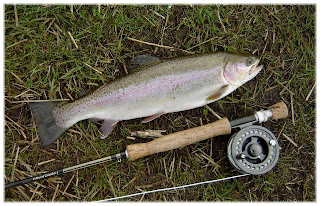 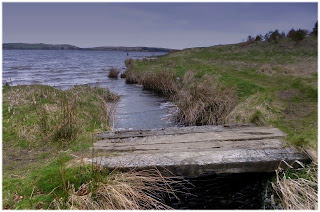 Today was all about avoiding the house as my wife was painting the kitchen. I blame Sky tv for giving women too many ideas. No I didn't make her do it. Its a labour of love for her but a nightmare for me. So off I went to the loch to miss the excitement of watching paint dry.
I got my waders repaired so I opted once again for the north shore but this time I fished from the Shields Burn to the coal/sandy bay. I had to wade out a fair bit as the wind was coming into the shore from the South west. I worked my way all along until i reached the sandy bay. Nothing doing I sat about a bit and wandered up the Shields burn to get some pics. I started again and fished right down the shore but all to no avail. I stopped for a break and had my coffee and sandwiches and tried once more at the mouth of the burn but still nothing was doing. So I decided I might as well try for a pike as I know where they live . So off I went to the usual place. The fishing was more comfortable as the wind was at my back. Soon as expected I hooked and caught a pike of about 3lbs. I had the fish on the edge of the bank and went into my backpack to get my camera when it started thrashing about about and cut my line and plopped into the water and swam away with my fly still in its mouth.
I tried for another but failed.
I then decided to go to the point opposite Spiers Island and waded out to the left and was able to get out a good distance. I should have come to this area earlier as the wind was at my back and I could cover quite an expanse of  water.
Eventually I hooked a trout. It put up a great fight and I was actually a bit surprised when I landed the trout as I was thinking it was a lot bigger than it was.I fished on for a few hours more knowing that as time went by the kitchen would be finished getting decorated.
I fished on but no further trout were fooled, hooked or caught.
One pike, One trout it was now time for some hot soup from the club house.
Just in case I had got my time estimates wrong I had another soup and sat in the carpark reading my book for a while just to give Val time to put the finishing touches to the kitchen.