Spellbound in the Highlands 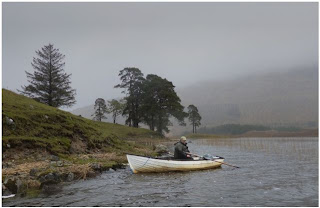 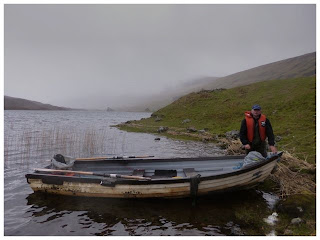 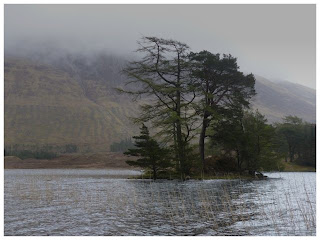 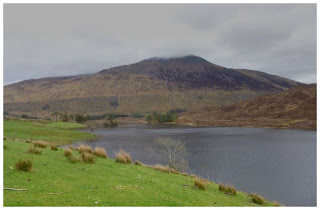 My first wild fishing trip of the year started in usual fashion, I slept in! well I was supposed to be up at 4.30am and I didn't  get to my bed until three hours before that.
A little later than planned my two mates and I begun the journey to Lochaber and the Loch of the Witches Lair.
Instead of taking our frying pan and cooking our own high cholesterol inducing goodies for breakfast by the lochside as we normally do we decided instead to have our breakfast cooked for us and sampled the delights of a full Scottish breakfast from a well known supermarket in Fort William.
Our ravenous appetite satisfied we drove the relatively short journey to the Witches Lair.
As we geared up and got ready to go afloat we noticed something that supported the theory that this area was indeed the site of witchcraft, we found a lamb's head lying on the shores of the loch. Perhaps it fell from a cauldron as a spell was being prepared.
Unperturbed we went afloat. Scott and I on one boat and Tam in the other.
The wind made the rowing hard work but we managed several good long drifts in the brisk wind and light rain.
We all started catching trout almost immediately and turning and losing as many fish as we caught.
The trout action was sporadic as we would cast away getting offers and catching fish frequently then as if a switch was flicked nothing would happen at all for a time then all of a sudden the action would start again. The most productive areas were the areas around the two islands.
In between drifts we came ashore for a break where we enjoyed a drink and the perfect fishing snack of cheese and oatcakes.
The trout were numerous, but of modest size, the best being about half a pound. We caught over thirty trout between us and got just as many offers too form these aggressive wee fighters. The fly patterns which were successful were a collection of traditional  wets. Bibio, Kate McLaren, Loch Ordie, Doobry, Wet daddie, Zulu, Clan Chief, Claret bumble, Connemara Black, Silver Invicta and muddlers.
As we neared the end of our day the weather improved but as the skies brightened and the wind ceased the trout stopped playing so we called it a day and rowed ashore.
This was my second visit to this loch but it was Tam and Scott's first visit and its fair to say that this loch has cast a spell on them lol! as they have vowed to return to this loch again in the summer.
I have to apologise for the lack of trout pics. Let me explain.I use my old camera for the close up shots as its much better than my new one. I had taken a few trout shots but for some unknown reason I got a flashing message on my screen saying format error!  Therefore I only have the pics I got with my new camera. Apart form the camera malfunction I had a terrific day out in the Highlands.