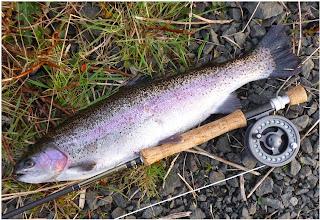 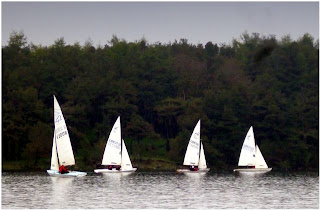 Yesterday I  arrived at the loch about half past one just in time for the mist which had lingered all morning was starting to disappear. I strung my rod and made up my cast of a gold headed hare lug nymph on the point and a Kate on the dropper. I walked along the south shore until I came to the two jetties at the wee moss where I met Jim the Greengairs man. He was leaving and told me a fish was moving about in this area but he had failed to tempt it and advised me to have a few cast there. As I approached the shore I saw a rise and after four cast hooked into a nice brown trout which grabbed my kate and then proceeded to thrash around on the surface. Unfortunately the trout threw the hook and I was left with that empty feeling that many anglers know so well.
I rested the water for a while and tried again but there was no further sign of a trout in this area..
I then noticed Iain a work colleague over near the cliffs who is learning to fly fish. I had  few cast at the wee moss but had no luck then I noticed Iain playing a fish I use the term play loosely as Iain admitted later that he hadn't a clue what to do when he hooked the trout.Lucky for him a nearby angler helped him to net the trout which was Iain's first ever fish on the fly.
A flat calm descended on the loch and the surface was like a mirror so it was time to have a break and have a rest. Later the wind picked up and it changed from a north east to a west wind. I had a few casts then decided to just sit back and watch the yachts weave in and out and waltz around the loch while I waited on Old Boy Billy arriving.
While I waited I made a change of flies and tied on a couple of cormorant variants. Billy and I started fishing from the wee moss and round to the Big Stane. Billy lost two fish and I at last managed to hook and land a nice rainbow trout of 3 to 4lb which was fooled by the cormorant on the dropper. Big John, Craig and Fraser joined us along the moss area. John caught two Craig lost one and Fraser caught a jack pike. I decided to call it a night about half past nine.
Last night was the first good night I have had on the loch with a few fish showing on the surface. It makes all the difference to cast at rising trout. Hopefully this was just a taster of things to come in the next few weeks as the fishing at the loch hits it peak.